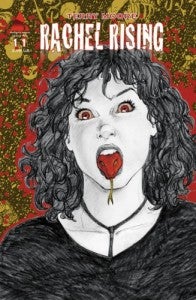 Over the course of the last two issues, Terry Moore has exploded the borders of Rachel Rising's story, with a number of major revelations and some changes to the basic premise that were pretty difficult to see coming. Still, we haven't talked with him about the title in a while. Today seemed like a good day to rectify that.

Remember that these are basically the "director's commentary." Many of these questions and answers won't make any sense if you haven't yet read Rachel Rising #11 and #12, and even those that do are likely to be spoilers.

So go buy those books, then come back. We'll wait.

You like to use snow a lot, especially when something really nasty is coming around the corner, don't you? We saw it in Strangers in Paradise and Echo as well. Is that a conscious thing, repeating the theme throughout the Terryverse?

In Rachel Rising, it's a metaphor for the nonstop body count of people dying in the world. A constant reminder, because we like to not think about it. I suppose it's always been that metaphor, even in the other books, but in Rachel it is finally explained.

This is a horror book, but it's very much a quiet book where there are occasional explosions, rather than a book that's all-action, all the time. I know The Walking Dead has taken some grief for that approach in the past. Do you ever worry about readers having trouble connecting to the slower parts of the issue?

Yes, because the people of today have been raised on short versions of everything. But, a cell phone society doesn't change the deeply human trait of caring more about something if you know more about it. And, it's hard to feel compassion when you're running all the time. And, if it's all action all the time, then it becomes meaningless. It's death metal. I like to go anywhere from Ravel to metal and back. It's a more dynamic experience.

Donna Fell. Get it?

The seeds have been planted in previous issues, but Malus certainly puts his plans in motion in a right hurry, and dramatically here. Is he up against a ticking clock?

I think it's more of a growing impatience. He has been trying to get out of his situation for a very long time.

That machine next to Zoe's bed, with all the dials and the like, seems a bit vintage. Is that an intentional choice, making the series feel like it maybe has happened in the recent past, or is it just a question of what's visually interesting? You did something similar in Echo, in terms of the truck. Is it just dull to draw more modern appliances and vehicles now that everything looks the same?

I like the look. I have my own weird steampunk thing, but it's more a blend of 1950's and now. It's all over the story, really. I just like it. 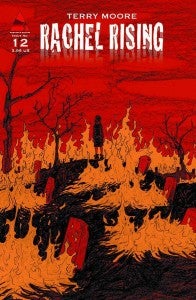 After your panel at Comic-Con, where you talked about not being so comfortable bringing a lot of violence and negativity into the world...this is a pretty brutal cover. When did you decide that Rachel was going to turn from an "open-ended" story, as you told us it would be when it first began, to something more along the lines of Echo, which is what you said at San Diego?

It depends on the sales figures, really. If sales slip on Rachel Rising I'll have to stop and move on. If sales increase, I'll keep going. I love the story, but I have to pay the bills. I've never enjoyed good sales figures, I just can't continue if they get any lower.

Do you have an endpoint in sight now that you've had a bit more time to chew it over?

I have an ending to the first big Lilith arc. And I have a strong vision for Rachel afterwards.

That's a really effective doe-eyed look on Jet we see at the beginning of the issue. Any chance that means "our" Jet is still in there somewhere, or is she just really, really convincing?

You were looking at Malus using Jet's face and body. Malus is a great actor. Where is Jet is an answer to come.

Is there a suggestion in here somewhere that while Jet and Rachel came back (and continue to do so) due to forces beyond their control, Jet believes that Zoe controls it somehow?

Jet doesn't know about this stuff. It's Malus who confronted Zoe and demanded answers, then told her is plan. How Zoe came back is not answered... yet.

So now that Malus has another host, will he be careless enough to let Zoe know who he is a second time?

I can't picture him being careless, but I'm sure their paths will cross. They're playing in the same sandbox.

Is Earl sitting by Jet because he's mourning or becuase he wants to be there when she wakes up?

We got nearly through an entire issue of Rachel Rising without Rachel in it. Is that one of those things you feel like you can only get away with in an indie book?

Don't know about the indy liberty, but when you have an ensemble cast, it does keep me from hammering at you with just one character all the time. I find it easier to consume a story when it's not too myopic. And it helps present a passage of time, allowing us to leave Rachel and know time has passed when we see her again.

Rachel Rising Creator Terry Moore Brings Us Up to Speed