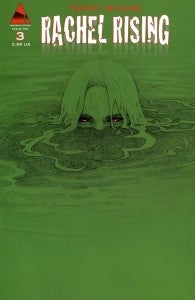 Did you know that Rachel Rising, Terry Moore's horror title that revolves around a murder victim returning to life in a creepy small town, has a soundtrack?

That's because Moore, who was a musician before turning to video work and then finally to comics, has been uploading tracks to a Soundcloud account that are Rachel Rising-themed. So far, it's just two tracks, but you can listen to or download them for free--they're great mood music for reading the comic and will probably be equally effective as background ambiance for your Halloween parties or front porch come October. Like the comic, one of the tracks hearkens back to Twin Peaks, where Angelo Badalamenti's chilling score set the tone for the bizarre and creepy world the characters inhabited.

Music is a pervasive theme in Terry Moore's work; in Strangers in Paradise, the songs of fictional rocker Griffin Silver was threaded through the series for years before he made an on-panel appearance as Francine's brother-in-law. Silver's grave is seen in the background of a cemetery, in the San Diego Comic-Con International-exclusive poster for the series that Moore drew last month. And in Rachel Rising itself, the title character's best friend, Jet, plays in a popular local band.

Several songs written and performed by Moore for Strangers in Paradise have been released online in the past, but Moore has never made a habit of keeping his music easy to find, making those tracks sought-after by late-coming fans; since he sometimes included sheet music and/or lyrics in the title, there are fans who feel the songs are an important part of appreciating the series as a whole. Some have even attempted to record the songs themselves.

Notably, the book also used prose as a storytelling device often; Moore is currently writing a Strangers in Paradise novel, which he plans to publish in 2013 to celebrate the 20th anniversary of that series, while characters from that book will reportedly appear in an issue of Rachel Rising soon.

Moore has also published songs from both SiP and Rachel Rising on his Tumblr, although those links don't tend to stay live for very long.

Rachel Rising Has a Soundtrack?