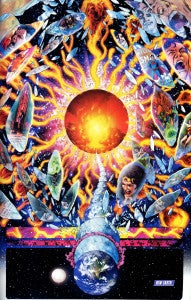 The end of the most recent issue of Rachel Rising, the Abstract Studios horror series from Strangers in Paradise creator Terry Moore, ended with a surprising twist that may leave one or more of his characters dead.

This isn't entirely unprecedented for Moore; during the years-long run on Strangers in Paradise, he killed a number of the series' ancillary characters and put two of the book's heroes into a near-fatal plane crash about halfway through--a crash which continued to reverberate through the series for years after.

And, he says, the "Big Two" superhero publishers could use a little of that. The sense of drama and consequence is lost, he says, when somebody dies and comes back around a few months later. Most comic book fans, of course, agree with that position, but Moore took it a bit further when we spoke to him at San Diego Comic Con International last month.

"How many times has somebody had to go save the universe?" Moore asked ComicBook.com. "At least once they need to lose it and everybody dies. And that's an American thing. In the European stories, the people do die. The hero dies, the country gets blown up. There's a lot of apocalyptic Australian movies where, yeah, the world did blow up. And then Steve Carell made that one movie where the world did blow up at the end and everybody was freaked out about it--like what? How did that made?"

Of course, in the film he's discussing--Seeking a Friend For the End of the World--the giveaway was right there in the title. But, still, people got mad. After all, Armageddon didn't actually accomplish what it said on the poster.

"Yeah--it was 'We told you--we weren't kidding!" Moore laughed. "But it's an American thing. We're used to having everybody ride off into the sunset. So it's fun to play against type. It's like a good TV series where something happens and everybody's wondering about it because they didn't expect it, you know? And that's what's entertaining, that's what's interesting. Sometimes writers will do things on purpose just to see if they can write their way out of it and you can't play it too safe, otherwise the read is not as interesting. You don't want to just start throwing a butcher knife around the room, but it's good to throw in an earthquake every once in a while and see what shakes out."