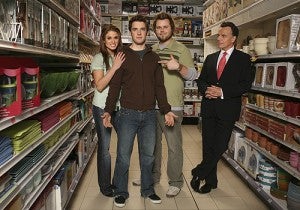 Cast members from the cancelled CW series Reaper will be coming together again on FearNet, who announced a reunion special after acquiring syndication rights for the 31-episode cult favorite.

The special will feature interviews and retrospectives with cast members and presumably showrunners about the show, its truncated run and enduring appeal.

The series, which had broad geek culture appeal with Twin Peaks's Ray Wise and a pilot directed by Kevin Smith, centered around a young man who discovered his parents sold his soul to the devil before birth and that he must now be a bounty hunter for the devil until he dies.

The series ran from 2007 to 2009 and was almost saved by a move to the Sci-Fi Channel, who ultimately didn't buy it. Even if they had, budget cuts reportedly would have dramatically altered the show, leaving many wondering whether cancellation was for the best. At one point, there were plans to continue the series in comic books, but those plans never came to fruition.

The frequent assurances that the story could continue in some form, combined with big success on home video, has frequently given fans hope that there will be new material coming eventually.

Spider-Man: No Way Home Will Only Play in Movie Theaters