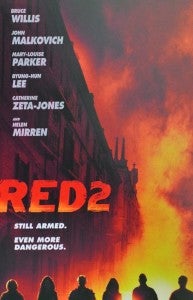 Lionsgate, facing a painful and embarrassing fourth-quarter financial report yesterday, has been looking to rebound by discussing some plans for the future with the media today. One of those plans? Turning successful film franchises into TV properties that can generate low-risk revenue for the studio. And among the properties proposed are the action-orgy franchise The Expendables and the comic book adaptation RED, both of which have feature-film sequels currently in development.

Collider reported on the initial discussion, where Lionsgate's CEO John Feltheimer told a "Wall Street analyst" that he was planning on turning a number of projects into TV shows, including RED and Step Up, both of which are properties brought to Lionsgate as a result of their expensive purchase of Summit Entertainment. That transaction is largely perceived as being to blame for the underwhelming fourth quarter at Lionsgate, but should show dividends soon, with both the final Twilight film and RED 2 hitting in the next few months. The studio's most successful film ever, The Hunger Games, has also not yet been fully accounted for in the studio's bookkeeping, which will retroactively help the numbers. Deadline later reported on the addition of The Expendables to the plan.

Whether Twilight might become part of this conversation could be an interesting wrinkle; while there are only four books in the series, and they've all been spoken for in the feature film arena, vampire dramas have done alright on cable in recent years and Lionsgate has expressed an interest in the past in expanding the Twilight franchise beyond the five films currently announced. Even if that were a plausible course of action, though, Lionsgate would be foolhardy to announce it now; much of the appeal of the final film in a franchise like Twilight is the drawing power of bringing casual fans back into the theater to see how it all plays out.