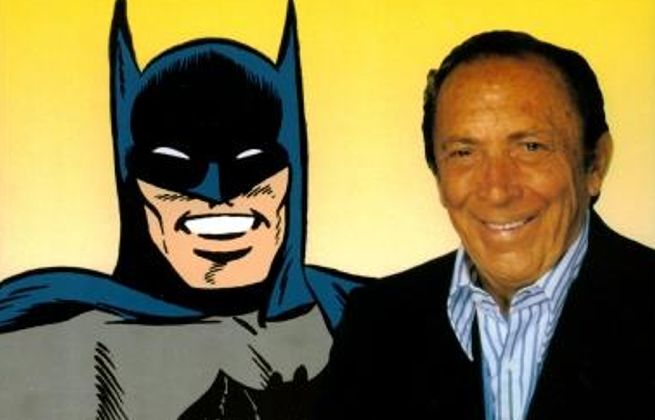 Bob Kane, best known as the man credited with creating Batman, was born 99 years ago today.

Born Robert Kahn in 1915, Kane was childhood friends with Will Eisner and worked with the iconic Max Fleischer Studio as a trainee animator in 1934, entering comics two years later and remaining in the industry, primarily working on or overseeing work on Batman, for thirty years.

Kane began working with Bill Finger, who would write the earliest Batman stories with him, in 1938 and around that time, success with Superman led DC Comics to seek out other superhero pitches. Kane came up with a character who drew inspiration from Douglas Fairbanks's Zorro and Da Vinci's Ornithopter, among other things. He sent the drawings to Finger, who suggested drastic changes to the character inspired largely by the comic strip The Phantom, and in 1939 their legendary creation made his first appearance.

An artist, editor and businessman, the exact nature and extent of Kane's contributions to comics history remain somewhat obscured by the fact that he operated a shop, essentially subcontracting work from publishers, so that he was often the credited creator on work he had hired out. He worked on Batman in the comics and newspaper strips, to one extent or another, from 1939 until 1966 but during much of that time he was using uncredited ghost artists, sometimes with and sometimes without editorial knowledge of the fact.

After his retirement from comics in 1966, he dabbled in fine art, television animation and wrote two autobiographies, as well as working as a consultant on Tim Burton's Batman in 1989.

Following the death of Bill Finger, who developed Batman with Kane, Kane said that he never felt Finger got enough credit, and would have liked to rectify that. To this day, Kane is the sole credited creator of Batman, a circumstance that is unlikely to change since DC Comics had entered into a contractual agreement with Kane when he was alive, which remains in place and identifies him as the character's sole creator.

New Pokemon Snap: How to Clear Leafeon's Operation: Be My Friend Request

The Good Asian #1 Review: A Timely Noir Tale of Race, Racism, and Crime