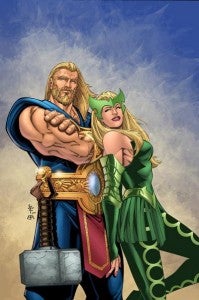 According to a report at Bleeding Cool, a well-placed source is saying without equivocation that The Enchantress will appear in Thor 2. The part is reportedly not yet cast, and our recent interview with Tom Hiddleston, who plays Loki in the Marvel films, indicated that the script wasn't even entirely finished, but the Bleeding Cool report said that they could say "with the utmost confidence" that fans would see the character in the film.

The Enchantress has a seductive streak and a dark side, but the latter is not always on display and she periodically appears as an antiheroic love interest rather than a threat to Thor. Expect to see a little of both in the film, if Hollywood convention is to be followed.

Little is known about the film's villains, although Hiddleston hinted that fans would be pleasantly surprised by where Loki's character is going in the film. At a minimum, reports have said that he will not be the main villain in the movie, and some have even gone as far as to speculate that he may be "turning good" in the upcoming sequel after his shot at the moon in The Avengers fell flat.

Report: Thor 2 Will Feature The Enchantress