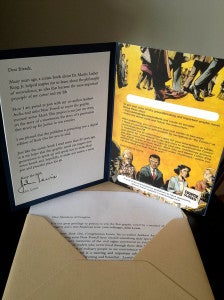 U.S. Congressman John Lewis made history earlier this year by becoming the first-ever member of Congress to write a graphic novel while serving in office. Now, the veteran activist and politician has the first graphic novel ever presented After more than five decades of activism,he's got the first graphic novel ever presented to every member of Congress. Lewis's memoir March: Book One, co-written with Andrew Aydin and drawn by Nate Powell, is the first ever graphic novel by a member of Congress. It debuted in August to great acclaim from critics, TV hosts, book festivals, schoolteachers, and young readers alike and a #1 status on both New York Times and Washington Post bestseller lists. That launch was recently followed by a re-release of Martin Luther King and the Montgomery Story, the groundbreaking 1950s comic book which galvanized Lewis and his generation of civil-rights activists, now available for the first time in digital format as well as a newly-reprinted edition. Now, to celebrate the launch of both titles, March publisher Top Shelf Productions has partnered with the Fellowship of Reconciliation (original publishers of The Montgomery Story) and ComiXology to share the works with Rep. Lewis' colleagues in Congress. Each member of the House and Senate is receiving a complimentary digital copy of both March: Book One and Martin Luther King and the Montgomery Story. In a statement accompanying the gift, Congressman Lewis noted that the March project "…is not just my story, it's the story of a movement, the story of a generation that stood up for justice in our country. "Just like the comic book I read more than 50 years ago, it is my hope that this graphic novel can inspire new generations to speak up and speak out, to make their voice heard, and, hopefully, to make our nation a more just and peaceful place for all." March: Book One is the first in a trilogy, with the second and third volumes planned for 2014 and 2015.