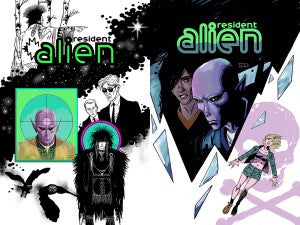 Dark Horse Comics announced today that Peter Hogan and Steve Parkhouse will return with Resident Alien, their critically-acclaimed story of an alien hero named Harry in a second series beginning this summer. Beginning with a #0 issue, the four-issue miniseries "takes you deep inside another murder mystery alongside comic's favorite medical detective. "A straightforward suicide . . . or a murder? At first, undercover alien Dr. Harry Vanderspeigle thinks the local police have this death solved, and then things get personal when one of his only human friends becomes a suspect. Also: The feds figure out that Harry's hiding in the Pacific Northwest!" Resident Alien: The Suicide Blonde #0 is on shelves August 18th and #1 is on sale September 11th.