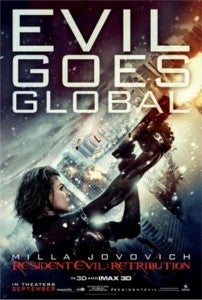 Summer is over, so the superhero movies have faded away. The Fall movie season brings us Oscar contenders and video game movies, which makes for quite the odd pairing. This weekend saw the release of what could be classified as the first big Fall movie. Resident Evil: Retribution is the fifth movie in the Resident Evil franchise, and it weighs in with a $65 million budget.

According to early projections from Deadline, Resident Evil: Retribution is on track to easily win the weekend box office with $23 million. Finding Nemo 3D is projected to take second with $18.3 million. However, there is always the chance that Finding Nemo 3D could pull in stronger than expected numbers on Saturday and Sunday as families hit the movie theaters and pull off a last minute upset.