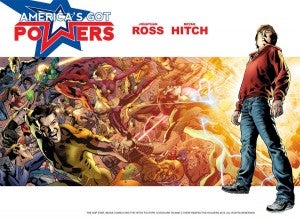 Jonathan Ross and Bryan Hitch's America's Got Powers #1 has all the elements necessary for success: the superstar artist, a great high concept and a gimmick that has the potential to transcend the comics page and be covered by the mainstream media (superhero reality TV isn't exactly unheard of even in our non-powered world). Hitch is also working on a new Image title at a time when the publisher is at the top of their game. Thief of Thieves and Fatale have sold out every issue since they began, the Extreme relaunch is a bona fide blockbuster and the publisher's 20th anniversary has almost every creator at Image doing their best to make it memorable. The mysterious alien power source bestowing powers on newborns who were in utero at the time of its arrival is a trope used to best effect in Rising Stars, although Smallville wasn't dissimilar and more or less any superhero story that involves a large number of people all getting powers together lean on some variation of the concept. It's really just backstory here, though; even though they give it a couple of pages, it still feels like a throwaway reference, and adds little to the story. The wrikle, though, and a cool premise if it could be believed to last, is that our narrator and main character is the only member of his generation (read: all the kids born that day, including many that were extremely premature but turned out fine due to the magic of the crystal that gave them powers), has no powers. That said, there are some problems with execution right off the bat; the narration stops abruptly to give us a glimpse of America's Got Powers--a TV reality show that's essentially Avengers vs. X-Men mixed with The Hunger Games--but when it returns to the narration, it's been three full pages with a lot of dialog, and the narrator picks up as if there hasn't been a break. This might work in screenwriting, when a voiceover is able to keep the viewer clear on what's happening by virtue of being a unique voice and holding things together, but even there it seems like there may have been too much of a pause to just end on "except for me." The Hunger Games comparison will likely come up a lot--so much so that this may have been a bad time for America's Got Powers to debut, as the notion of "punishing the powers for their naughtiness" (which appears to be the justification for subjecting them to the competition for the entertainment of ordinary folks) probably feels more derivative now than it would have six months ago, or in six months. It's a consistent problem--from the "shocking" violence of the combat to the leggy, pink-suited US Senator who looks like Sarah Palin and talks like Jessica Walter from PCU, the book isn't bad, per se, but there's nothing original in here--a lot of it feels like it's been done better somewhere else. Even Hitch's art frankly feels a bit like a poor man's Alan Davis in this issue, leaving the whole thing feel a bit flat, like a show you really wanted to like until it turned out the actors had no timing and the script lacked any sense of urgency or pacing.