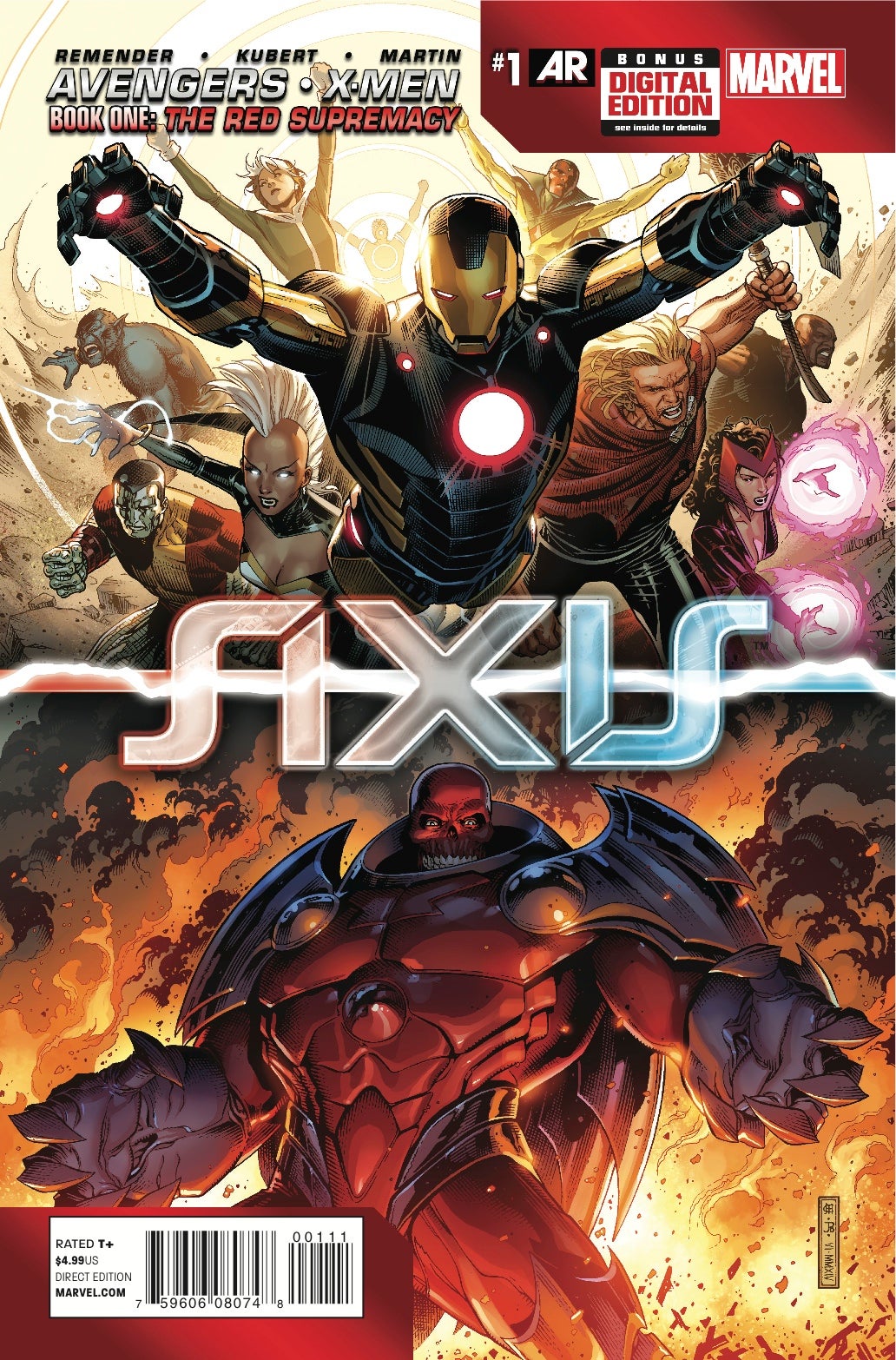 The term "event fatigue" explains a lot of the reasons why the first issue of Axis falls flat. It's not that events are incapable of being exciting or interesting; they can be both. However, the staples of event comics: big stakes, giant villains, and lots of heroes don't carry much impact anymore. There are moments in Axis #1 that are comparable to Crisis on Infinite Earths, perhaps the single greatest event comic of all time. The difference is that Crisis did it first, while Axis is doing many things for the nth time this year.

The panels and sequences that evoke the epic scope of Crisis are the highlight of this issue. Red Skull's transformation into The Red Onslaught provides an antagonist that is operatic in appearance and nature. The concept of fighting a supremely powerful being that is the manifestation of pure hatred is the sort of idea that superhero comics excel at, and Adam Kubert presents it beautifully.

The monster fills two page spreads, dominating compositions while colorful swathes of heroes work to combat him. Massive panels and entire pages read well without any context due to Kubert's staging of the many characters in opposition to this horrific creature. There are some action sequences where the panel choice creates confusion. Kubert does not always provide a clear perspective of the characters involved in each action and, occasionally, fails to set up a cause-effect correlation between panels. He is primarily focused on big, impactful panels though, and largely succeeds in these moments.

The true stumbling block of this issue lies with a lack of drama. Rick Remender provides a reason to care, but it is a very generic one. The earth and all of humanity are threatened. It is the same threat that can be found in hundreds of other comics set in the exact same genre. It is the same threat that can be found in most Hollywood blockbusters. An increase in scale does not guarantee any sort of emotional investment from the audience. Drama and stakes have to be carefully built. They come from making people care about individual characters and what those characters care about. A single life can feel bigger to a reader than the entire world, when a story is well told.

That work is not present in this issue. The story takes for granted that the audience cares about what is occurring simply because it is big, and then indulges in the fight. What drama there is carries over from previous stories and doesn't naturally connect with these events. Important reunions fall flat because they simply happen. There are many moments that feel as though they belong in some other comic. At the end of the issue, I was left asking why I was supposed to feel something about this story and could not find a satisfying answer.

There is a death in this issue of a character that I feel some attachment to, but it is random and unearned. Rather than reading as a shocking, saddening moment, it plays as an overt demonstration that this story is supposed serious and consequential. That sort of tone cannot be so bluntly stated. Readers cannot be told how to feel, they must be made to feel something. It requires careful work to evoke emotion though. That work is not present here.

Axis #1 is nothing special. It is not offensive, but also lacks any notable features. Kubert's art still provides plenty of spectacle for readers to enjoy with lots of characters engaged in a broad battle. The drama that is supposed to be in those panels is non-existent though. The Marvel universe may be briefly changed by some fallout of this issue, but Remender and Kubert never craft a reason for readers to invest in or care about this story. It reads like another event comic that does nothing to distinguish itself from all of those that have come before.

One Piece Sets Up the Straw Hat Crew's Next Adventure