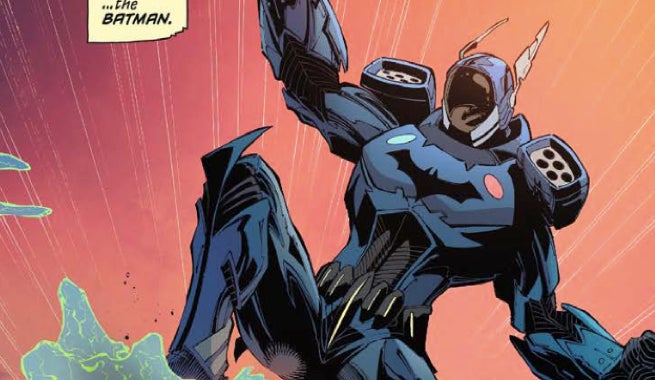 With a new knight in Gotham City, the bat-signal has never shined brighter.

Batman #41 marks the next major chapter in both creative duo Scott Snyder and Greg Capullo’s esteemed Batman run, and the Batman mythos themselves. With Bruce Wayne off the board following the events of “Endgame” Commissioner James Gordon takes on the cowl for one of the most intriguing reinterpretations on Batman yet. Cool, confidant, and ready to impress, Batman’s latest spin has something for everyone to enjoy.

Much of this new Batman’s success lies in man underneath that mech-cowl: Jim Gordon. Batman—and his various replacements throughout the years—have always represented myths. Bruce Wayne, Dick Grayson, and yes—even Jean Paul Valley—are all exaggerated perfections of humanity. Yes, they’re “mortal,” but they’re unlike any mortal you’ll find at the local supermarket. That’ not the case with Gordon. With the former police commissioner, Snyder effectively puts the “man” back in Batman. He’s realistic in his expectations, both towards himself and what the Batman can achieve. As Batman, Gordon makes us belief that if we just sacrificed our vices, hit the gym a little harder, and had our own suit of armor, we could protect Gotham city too. Batman actually feels relatable for the first time ever, pushing the character’s ideals just a few inches closer to our grasp.

Credit most of that to Snyder, who slips into Gordon's head just as easily as he did Bruce Wayne's 41 issues ago. Snyder finds the perfect voice for Gordon, striking a tone that's light-hearted, but not aloof. It's a treat to peer inside the former Commissioner's head, as Snyder's internal monologues reveal reveal a far different Gordon from what others can see. It's an interesting dynamic, as Gordon channels his inner Batman on the outside, but thinks more like Robin on the inside--despite his best attempt to think "bat-thoughts." Snyder's Batman is a clever approach to the idea of a "Dynamic Duo," sending Gordon and the concept itself into fresh territory.

That playfulness is translated beautifully through Greg Capullo’s art. The issue’s actions and motions feel majestic, weightlessly flowing from one panel to the next with grandiose set-pieces. And while the “bat-bunny” suit looked a tad goofy in DC Comics’ first promo image, Capullo really makes it work in-action. While certainly not as menacing as Batman’s original costume, the new suit is playful and inventive, allowing color to define it instead of the shadows. Speaking of color, colorist FCO Plascenia is on fire—almost literally—as well. The story’s main thread, a brawl between Bat-Gordon and an energy monster, bursts with bright, citrus colors. Looking at each moments is like taking the first bite into a Starburst: They’re sugary, sweet, and filled with a heart-throbbing excitement (without the eventual crash).

And like a piece of candy, it's clear that the creative team is having a grand old time with their new Batman. While not the campy throwback that Grant Morrison’s Batman and Robin series—a relaunch that Snyder likened this issue to—Batman takes takes joyful step into the light. Gone are the heavy studies of mythology and history that dominated Batman’s first forty issues, replaced with a cocky adventure that loves wearing its heart on its sleeve. As fun as it is dramatic, one could liken this new era as a spiritual successor to Batman: The Animated Series.

The only real cost to all of this swashbuckling bat-dado is the issue’s villain, who’s nothing more than a disgruntled training exercise for the new Bat-Suit’s abilities. It’s a worthy sacrifice, however, as somewhat baseless action gives Snyder plenty of room to explore Jim Gordon’s motivations, convincing us—and the character—why he should be Batman before Gotham's other vigilantes or policeman. But now that Gordon’s back-story is convincingly established, Snyder will hopefully start constructing a new rogue’s gallery to complement this not-so-dark knight.

Like Gordon himself, this latest chapter in Snyder and Capullo’s saga is suited for success. Filled with humor and bravado, this new take is an excellent remix of all that readers love about Batman and his world. While some ancillary knowledge of Snyder’s Batman run would further the reading experience, this new adventure is accessible and welcoming enough for readers new, lapsed, or old. The creative team is ready, Batman is set, and readers a-go for the most hair-raising Batman tale in years.

REVIEW: Batman #41 Is A Beautiful Remix Of Everything Right With The Dark Knight