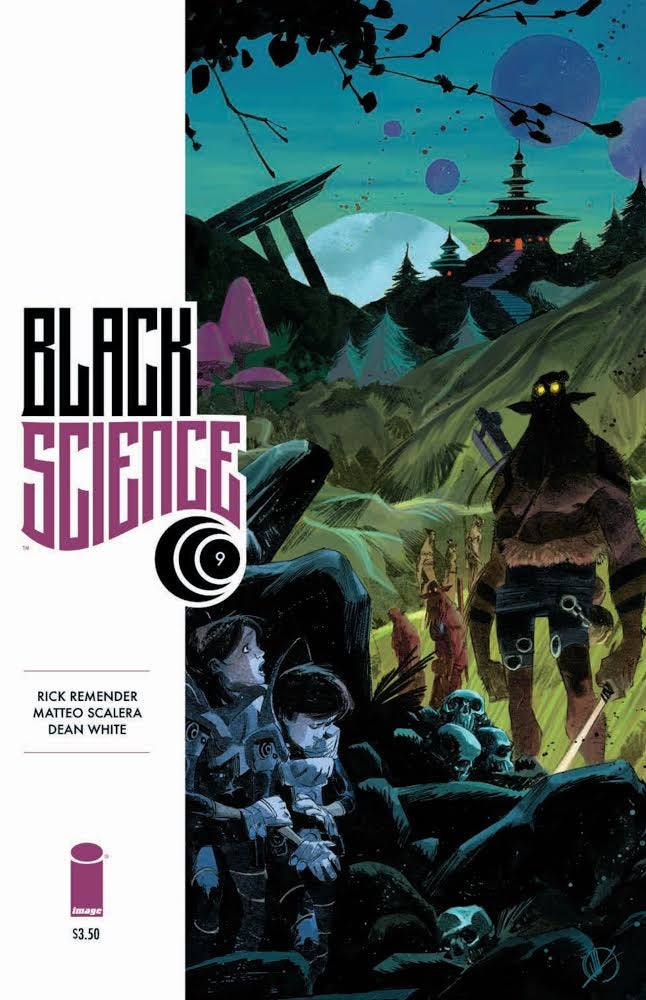 Black Science #9 is certainly a middle issue. It picks up various ongoing plots and adds some more, but only works to forward these narratives a little further along. That’s not a bad thing, but a side effect that comes with telling an episodic story. There will always be middle issues that feel somewhat scattered due to their limited space. However, Black Science #9 still manages to show off what makes the series one of the most exciting launches of 2014 by doing something interesting in every separate part of the issue.

There has been an emphasis on the humanity of the entire cast of characters in Black Science. There are no heroes or villains in this comic, only people. Rick Remender has slowly worked across this wide ensemble to evoke empathy for even the most seemingly unlikable amongst them. The dream sequence that opens Black Science #9 provides some insight into Rebecca, designer of the Pillar and Grant’s mistress. She has primarily been left in the background until now. Revelations about her past and her current motivations help to make Rebecca seem more human and her past indiscretions and choices more forgivable.

The plight of Nate and Pia serves a similar purpose. Although much younger, and devoid of the deep character flaws of someone like Rebecca and Kadir, they have not been a focus of the series until recently either. Split from the others on this hostile, alien world, they’re given an opportunity to reveal the depths of their character. It allows for a moment of heroism that is deeply endearing. Both this story and the Rebecca’s dream sequence read like brief check ins by Remender and Matteo Scalera though. They are brief moments that move the story along a little and ensure the series does not forget about what is happening with its central cast.

The central story and highlight of Black Science #9 lies in the second half of the comic. It’s a sequence that is reminiscent of the first issue, in that it is incredibly fast paced, focused on the adventure before introducing a character. I’ve compared the series to Raiders of the Lost Ark before and will continue to do so as long as Scalera crafts great action sequences like this. This is a chase comparable to Spielberg’s direction of Indiana Jones fleeing Nazis in Egypt.

Scalera makes use of wide panels with elongated horizons to accentuate the velocity of vehicles. Cars move forward and almost out of some panels as they hurtle forward. Sharp, tight lines streak across vehicles, people, and the setting itself to highlight the direction of the action. Scalera’s work manages to create a sense of momentum in static panels. Ever since he worked on Dead Body Road, it has been clear that he’s a master of the comics car chase and he unabashedly shows off those skills here. That aspect of this sequence is thrilling enough and there’s still an intriguing twist offered as a capstone to the issue.

Although Black Science #9 is a somewhat uneven issue that jumps between a variety of threads working to move each forward just a little, it still manages to be an exciting new chapter in the series. Remender and Scalera continue to bring their best work to each page of this comic, providing a deeply human cast of characters set in a thrilling adventure. Taken individually, each segment of this issue can be read as a showcase for what makes Black Science a great comic.