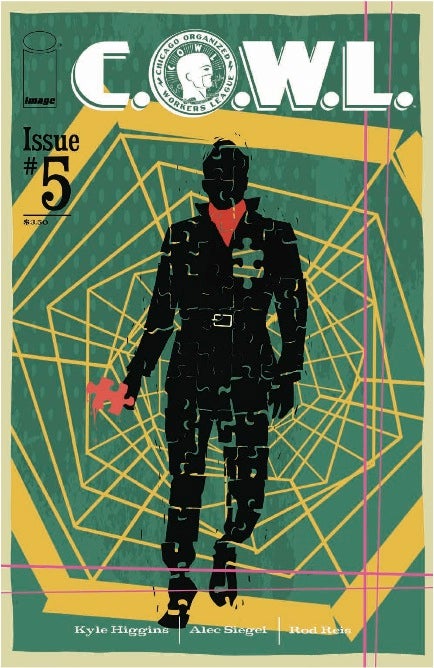 C.O.W.L. reminds me of season two of The Wire in a lot of ways. That’s probably one of the nicest things I’ll say all year. Comparing anything to The Wire is high praise. There are plenty of differences. C.O.W.L. focuses on a single group, is structured as a period piece, and includes the fantastic element of superheroes. Yet it covers a lot of the same thematic ground, exploring the dysfunction of institutions and how this affects individuals and communities. It also hosts a diverse cast, all of whom are presented as complex individuals. C.O.W.L. #5, the conclusion of “Principles of Power”, captures all of these similarities and allows me to feel comfortable comparing it to one of my favorite fictional works of all time.

It appears that Kyle Higgins and Alec Siegel have held off on presenting the central conflict of the story until this issue. It isn’t until the very last page that the shape of the series comes into focus. That’s not a criticism. This delay was a smart move on their behalf. The first five issues of C.O.W.L. have been able to explore the conceit of the story and, more importantly, the characters that exist within it. Higgins and Siegel want their comic to be character driven and have elected to place the emphasis of this opening storyline on the people involved.

This allows for the morality in this story to remain ambiguous. There’s no interest in casting characters as good guys and bad guys though. The “heroes” of C.O.W.L. are people and their decisions are all based upon understandable motivations. No one in this comic wants to do the wrong thing. Even if readers may disagree or disavow their choices, they should be able to ultimately understand why they made them. I was upset at the end of the issue, but I didn’t hate any of the characters on the page. Instead, I felt saddened. The actions here are committed with the best of intentions and it’s difficult to not sympathize with even the most unlikable characters. Higgins and Siegel have capably humanized their entire cast.

It’s that humanization that will allow them to explore the ideas in this series. The ability to empathize with people doing the wrong thing provides insight into the causes for these decisions. As a period piece, C.O.W.L. is set in one of the best possible cities and decades to discuss organized labor and urban politics. So far, Higgins and Siegel have focused mostly on the effects of institutional dysfunction rather than the causes. Other topics like the racism and sexism of the period have also been addressed, but there is not much insight into the subjects beyond their existence. C.O.W.L. #5 represents a good start for the series, one that creates fertile soil to be tended. There’s much more exploration to be done in order to craft strong statements about the subjects it is addressing.

All of this would be impossible without Rod Reis’ art. Although their styles are very different, he reminds me of Michael Lark in that he applies what David Mamet calls the “uninflected shot”. He presents characters and actions as they are without attempting to evoke specific emotions or judgement. Reis understands what this story is about and wants to show things for what they are and allow readers to make judgements. He is not interested in holding hands and explaining how the audience should react. His work here is surely beautiful and I find his style unique and refreshing, but his presentation of the story should not be overlooked.

With Reis excellent eye for juxtaposition capably framing the characters and ideas behind C.O.W.L., there’s a lot to be excited about moving forward. Although it may still lack some of the depth and realism of The Wire, it is beginning to capably address the same complex themes as that episodic masterpiece. It will certainly not be an easy task, but Higgins, Siegel, and Reis seem up to it.