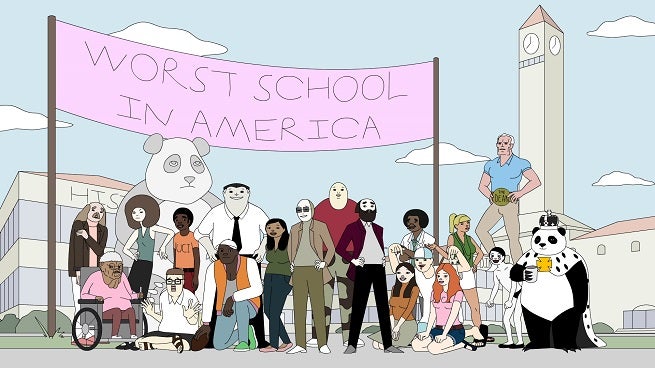 Adult Swim's China, IL is back and bigger than ever--literally. The third season, which debuted last Sunday, saw the series grow into a full half-hour show. The premiere episode is crammed with some of creator Brad Neely's most insane writing and vernacular yet. Case in point: The phrase "doodoo dicks" is mentioned more than once. If you're not accustomed to this surreal and abstract world, just think think of China, IL as Community on weapon-grade meth.

The premiere episode, "A Gentleman's Bet" continues the show's focus around Steve and Frank's bizarre, brotherly relationship. It's business as usual when The Brothers Smith return to another year at the worst school in America, as they place their annual bet on who can get a fellow classmate to sleep with them first. The premise gives the same type of vulgar and irreverent humor we've gotten used to with this series. Of course if you know Steve, the so-called "better brother", you know perfectly well how this wager will go down.

Meanwhile, Dave Coulier returns as Ronald Reagan. This time,  President Reagan is even more disturbed (yes, he's magically president once more) launches a bid to control the world's population. Even the Mayor and the Dean (voiced by comedian Tommy Blacha and wrestling legend Hulk Hogan, respectively) have put their differences aside and forged an alliance for a "think tank" to solve Reagan's conundrum.

The moments in the think tank are easily the episode's funniest. It shows Baby Cakes' debilitating indecisiveness, while in contrast, Steve and Frank demonstrate just how bull-headed they are. Even in this "bet", they're careless and almost predictable.

Elsewhere, assistant teacher Pony Merks is just trying to escape the think tank, more focused on finding a simple solution for curing the world's overpopulation. At first the solutions are simple. You know, like mandated sterilization in China. This feeds into other suggestions like drowning the South and making everybody gay. Had China, IL continued with its 15 minute format, bits like this would have most likely wound on the cutting room floor. Hopefully, the show will continue to capitalize on the expanded run-time with more clever bits like these.

An episode like "A Gentleman's Bet" is something of a litmus test to know whether or not someone can enjoy China, IL. It might not have the sharp quips like The Venture Bros. or the extremely crazy animation style like Super Jail, but China, IL is still full of raunchy laughs. But even if you're not keen on the episode's more risque elements, there are still plenty of quieter bits, like the Latin/Asian/troll-like student Hoh-Hoh thread, that will earn a laugh.

China, IL might not be as established as other Adult Swim shows, but it still offers that same signature variety of weird and offbeat style that has popularized the brand. It's a strong start to the season, making it finally feel good to be back in school.