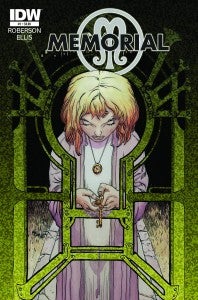 The premise alone is enough to sell you on Chris Roberson and Rich Ellis' Memorial, which just had its second issue hit stores from IDW Publishing. It's a book about a woman whose past is a mystery even to herself, but whose future seems bound to an oddities store with a magical green door. It's been called (by Roberson himself) as "a kind of cross between Doctor Who and Sandman by way of Miyazaki," and that's pretty close to accurate--a plane exists in Memorial on which any idea that ever could exist, does, and needless to say that's fertile ground for conflict as not every idea is going to coexist nicely. But I'm getting ahead of myself. Ellis's clean lines and approachable designs are fantastic but familiar; they make the introduction into the strange and often surreal world of Memorial an easy transition, even for those (like myself) who are somewhat put off by fantasy stories. Roberson, who was able to admirably salvage the wreckage of Superman last year when saddled with wrapping up Grounded so that Straczynski could move on to his next project, and whose iZombie has been one of the most patently awesome titles Vertigo has launched in the last decade, is doing the best work of his comics career here. Like Sandman, or some of the smarter and more impenetrable work from guys like Grant Morrison, there's a healthy (if somewhat confusing) dose of abstract concepts that act as characters with their own (admittedly vague) motivations. Those concepts are also powerful enough to have foot soldiers--including shadow people with mysterious and substantial powers, statues that can come to life at the order of an animate puppet, and "pirate" called Hook (whose relation to an elderly shopkeep named Peter is thus far ambiguous). With a pedigree in both historical fiction (his prose novels) and mythology (his Eisner-nominated Cinderella: From Fabletown With Love), it wouldn't be any particular surprise to see that particular relationship come to fruition, but Roberson has wisely let it simmer at least for this first couple of months, allowing the reader to speculate on the nature of the characters and their relationships, rather than rushing right into developing the most potentially-marketable aspect of the book. 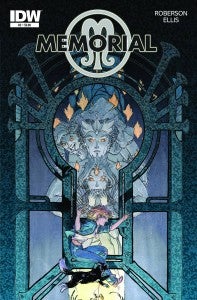 Which is part of the charm of this book; launching as an ongoing series, Memorial has the legroom to give us quiet, character-driven moments, allowing us to get to know Em (that's our main character, named for the monogram on her necklace, which was the only thing even remotely passing for identification she had when she turned up in a Portland, Oregon, hospital at the start of the tale) and her companion, a talking cat named Schrodinger. Oh, yeah. There's a talking cat. Named Schrodinger. In case this book wasn't already enough fun. The first two issues take familiar imagery and concepts and turn them on their ear, leaving the reader to wonder whether that really is Peter Pan and how the Emerald City might tie into all of this insanity--all while Em agonizes over the power and responsibility dropped unexpectedly on her head by the shopkeep that she may have accidentally left for dead. Schrodinger--her guide through and sounding board about these trials--is a textbook snark, equal parts helpful to the daunted every(wo)man and frustrated by her lack of understanding of the rules by which he's used to living. There will be the inevitable comparisons to Bill Willingham's Fables--something that would have occurred no matter what, given the big concepts and familiar imagery played with in the story but which seem even more likely to come given Roberson's own connection to the Fables universe. Even so, such comparisons are largely unfounded. Even if all of the above conjecture turns out to be correct and we start to see Wizard of Oz and Peter Pan characters popping up in this story, it's no more Fables than Fables is the League of Extraordinary Gentlemen. The universe this story operates in, and the ground rules it's set for itself, is not only vastly different from Fables but from any other story in comics today. The Sandman comparison is one that no sane writer wants to invite, but there's a reason that Roberson fell back on it--it's about the most accurate touchstone that would be widely familiar to many fans. In a twelve-month window where we've been given Shinku, Rachel Rising, Prophet and the DC relaunch, it's easier than ever to remember the kind of madcap genius that inhabits the comics industry, and the kind of bold imaginations that will help keep the art form afloat even as the direct market and the bookstore market both face unprecedented challenges. Memorial stands shoulder-to-shoulder with those books and offers the kind of ambitious, brilliant storytelling you always hope for when opening the first issue of a new title. You can hear Chris Roberson, among others, interviewed on the Panel Discussions: 2011 Year in Review podcast right here at ComicBook.com.