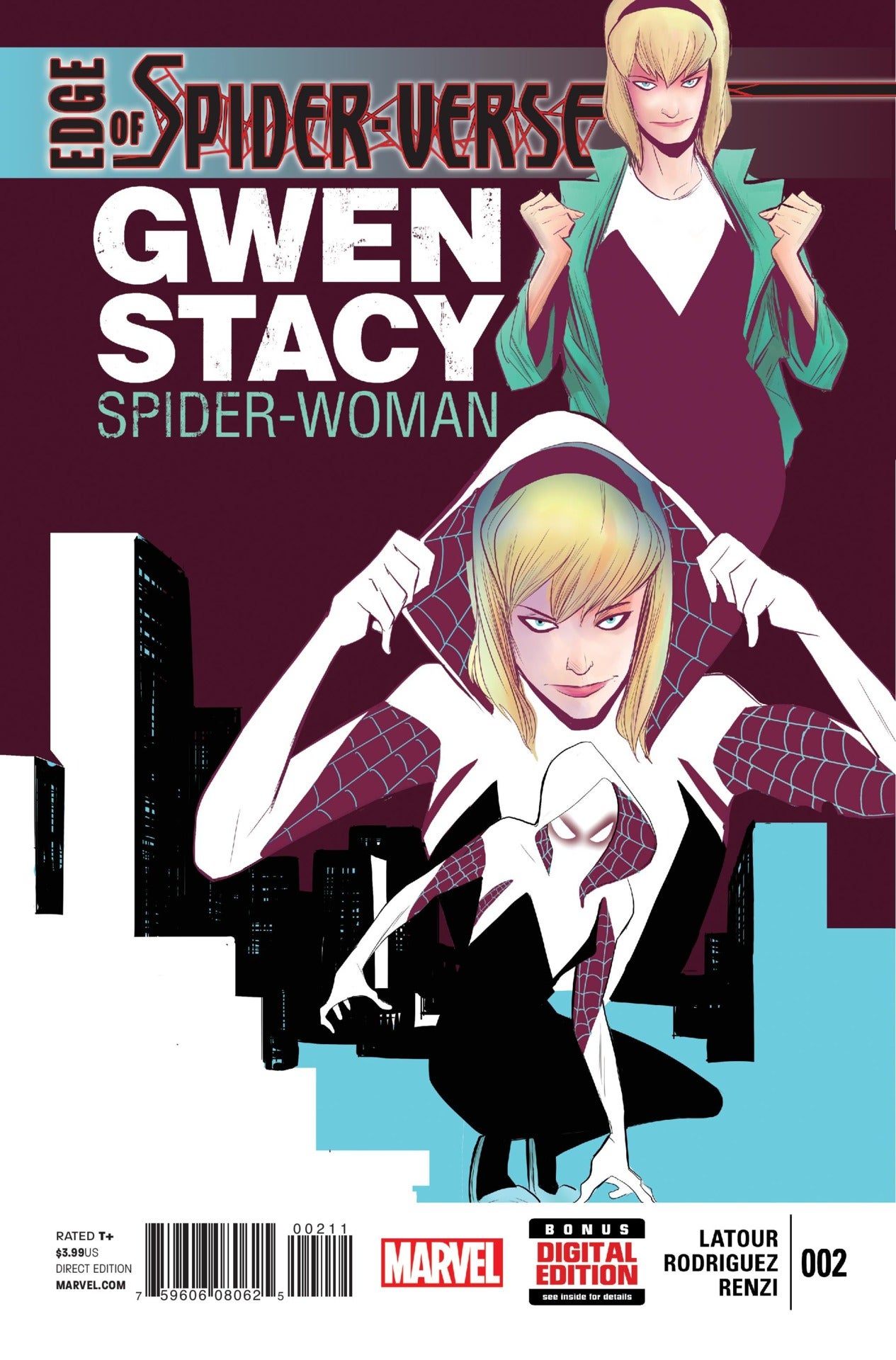 I've been predisposed to like Edge of Spider-Verse #2 for a long time. When the Robbi Rodriguez design for Spider-Woman (a.k.a. Spider-Gwen) was released, I fell in love. It was sleek, cool, and blended both classic and new elements. It popped in a way that most new costumes and re-designs never do. Everything from the functionality to the color scheme worked just right.

Then a batch of preview pages were released and I fell in love again. The two-page origin, the teenage characterizations, and facelifts to classic characters were all spot on. Rodriguez's load, raucous energy poured off the pages. They were good, damn good, but only a small sample of an entire comic book.

Now the issue is here and I can't help but falling in love once more. Edge of Spider-Verse #2, the debut of Gwen Stacy as Spider-Woman is an almost perfect superhero comic. The biggest flaw is that there's no guarantee of Jason Latour and Robbi Rodriguez creating an ongoing series to follow this issue.

The issue is pure rock and roll. I didn't get past page one before I felt the need to get up and turn on some music. I opted for the album One by One by the Foo Fighters. Your mileage may vary on that selection, but I recommend something loud that makes you want to move. Make sure it has lots of drums too.

I make that recommendation because the entire issue is built around music. Music has been structured into the plot and the very feel of the comic. The story starts at a rehearsal of The Mary Janes, a garage band with lead singer MJ and drummer Gwen Stacy. Rodriguez places the music into the story in the form of lyrics and the "DUN DUN DUN" of Gwen's drums. Those elements scream on the page written and colored like they were on the cover a 90s punk album. They're so loud that they shake with the volume of the amps and drum set. It's impossible to read these pages and not want to turn up the volume of your favorite rock band.

That musical motif visually evoked by Rodriguez is structured into the fabric of this issue. It surfaces and resurfaces creating an important theme that helps to inform who Gwen is and what she is feeling. It's not just one cool trick; it's a fundamental aspect of the comic's language.

Rodriguez and Latour set an eight-panel origin into the middle of this rehearsal. It's an exercise in economy, selecting the right moments to establish who Gwen is and what the status quo is like. Latour is able to convey what he needs to in a few brief exchanges of dialogue, rather than bogging down the story in expository captions.

That origin also helps to establish that Gwen is not a direct analog to Peter Parker. She's not even close. Latour writes Gwen as her own person. She may possess the old Parker luck, but her attitude and personality are vastly different. Extroverted, musically oriented, and a little uncouth, she reads like a brand new character because she truly is. Key elements of the Spider-Man mythos remain. Great power and great responsibility are still there, but the journey to reach that still inspiring concept is a vastly different one. It is restructured to reflect on modern themes and choices about education and work.

The other notable changes in this alternate Spider-Verse are exciting as well. A surprising figure has replaced Wilson Fisk as The Kingpin. The shock is half of the fun, so I won't spoil it here. However, that twist alone leaves open a world of stories and other surprising changes that can only be hinted at in these pages.

Latour and Rodriguez provide re-designs for two other significant Spider-Man characters: Captain George Stacy and another classic villain. Rodriguez has altered Stacy to be a much sturdier figure, closer to Commissioner Gordon in appearance than the the Silver Age incarnation of the character. His changed appearance reflects a change in his personality too. Rather than the frail looking and wizened mentor of the 1970s, he is a strong, capable father figure. His frame and mass strikes a dichotomy with the thin, wiry figure of Gwen. Their designs highlight a key conflict of the comic. The Stacys are simultaneously opposed and aligned, seeking to do good, but set against one another by their roles as vigilante and law-enforcement.

Rodriguez's revamp of a classic villain is not quite as visually invigorating as Gwen's, but is still effective. Design, body language, and colors clearly inform the characters abilities and attitude. Even without any hints as to who this character is, it would be easy to guess in spite of some drastic changes.

The climax of the issue does parallel a classic Spider-Man sequence though, the climax of Amazing Spider-Man #33, the final part of "If This Be My Destiny…!" That issue is, if not the best single issue of a superhero comic ever, at least the best Spider-Man comic ever. It embodies the heroic core of the character in a striking series of panels where Peter Parker forces himself to do the impossible purely because he must in order to protect those he loves. It's responsibility, power, determination, and adolescence fused into a big operatic visual metaphor.

There is no better source of reference when constructing the conceit of a new superhero based upon Spider-Man. Gwen's battle ends with her facing incredible pressure (quite literally) and she must overcome it in order to save those she cares for. The panels slowly expand as she fights back and succeeds in a spectacular finale. It pulls in everything set up earlier in the issue too from her family dynamics to the musical motifs.

In that sequence Latour and Rodriguez capture both the essence of what makes Gwen Stacy special and also how she captures the central conceit of the Spider-Man mythos. It's a great ending, although hopefully not for long.

I want a series featuring Gwen Stacy, The Spectacular Spider-Woman written by Jason Latour and illustrated by Robbi Rodriguez. I really, really want it. Marvel Comics has captured lightning in a bottle with this issue. It's sleek, smart, and so damn cool. I simply don't have enough superlatives for what Latour and Rodriguez have created here. So I'll leave it at this: buy Edge of Spider-Verse #2. And after you too fall in love, make sure to write in and let Marvel know that you want an ongoing Gwen Stacy, The Spectacular Spider-Woman series.

Face it Marvel, you hit the jackpot.

ADVANCE REVIEW: Edge of Spider-Verse #2 - "Face It Marvel, You Hit The Jackpot"