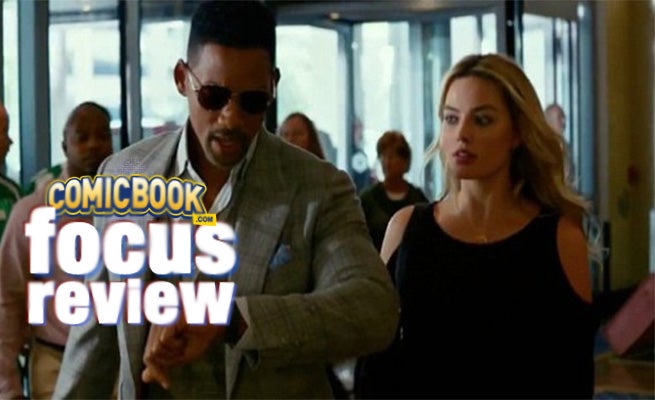 Deadshot and Harley Quinn got together for a little criminal activity ahead of time in Glenn Ficarra's and John Requa's Focus. Will Smith and Margot Robbey star alongside Rodrigo Santoro, Adrian Martinez, and Gerald McRaney in a criminal masterpiece, which hits theaters Friday.

Nicky (Will Smith) is an impressively suave and calm, know-and-done everything about the business con man. He's a mastermind thief with an army of skilled criminals working in sync with him in ways that will make you grasp your wallet and watch nice and tightly on the way out of the theater.

Nicky is having dinner alone when suddenly, an amateur female version of himself joins. Jess (Margot Robbie) and Nicky are meeting by chance in a fancy restaurant and really hitting it off it seems. Well, it's all part of a plan I'm not going to soil for you.

Once that plan fails in witty, comedic fashion, the tone is set for the rest of the adventure. Nicky trains Jess into the criminal she dreams of being with the help of the key players on his team, Farhad (Adrian Martinez) and Horst (Brennan Brown), who happens to look and sound like Kevin Spacey Jr., then parts ways with her without giving her a choice.

The train leaves New Orleans and three years later stops in Buenos Aires, where Nicky is hired by Garriga (Ridrigo Santoro) to rip off a competing racing team. Of course, it's not going to be as easy as Nicky makes it sound or we wouldn't have a brilliantly written third act. Jess happens to show up as Garriga's girlfriend, taking away enough of Nicky's focus to throw his plan off balance.

The way the story comes together through the first two acts will have you absolutely puzzled as to how it will to wrap up. For a while, I doubted the possibility of a satisfying ending. Boy, was I wrong... Writer/director pair Glenn Ficarra and John Requa deliver a final couple scenes that had me not only satisfied, but also shocked.

It's not all about the ending here, though. Earlier in the film, Ficarra and Requa created a couple of the most intense scenes I have seen anywhere which do not involve any guns or violence. There is one particular scene at the Super Bowl where Nicky and Jess are joined by a man sitting near them for some fun betting. It turns into the most intense gambling sequences I have ever watched. I mean, seriously, my heart was pounding. The payoff of the scene was top-of-line, too.

The comedy that is laid out throughout the film never misses, either. While some of this can be credited to Will Smith's "Alex Hitchens" style of delivering lines, I would be lying if I said Adrian Martinez wasn't fantastic and didn't steal the screen each chance he got. There's one particular scene between Farhad and Jess that I am almost positive was completely improvised and never intended for use, but it is one of the most memorable, comical parts of the film.

Bottom Line: Focus has the utmost intense scenes without guns or violence and a brilliant plot, full of wit and surprises to match. 9.2/10

REVIEW: Focus Is The Hammer, Not The Nail