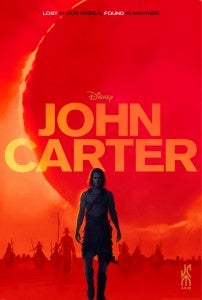 While the plot of Andrew Stanton's film adaptation of Edgar Rice Burroughs' John Carter is a pretty standard one, it is done well. It manages to imply the inevitability of Carter to be a war hero through action rather than inaction and tells a redemption story by providing him with a second chance in a radically different environment.

Right away, the story gives the audience an insight into how it will end: they know that it will end well, since on Earth he has lost everything and is alone and running on empty. Being able to watch his ascent from vagabond outlaw to prodigal king is what compels the audience to stay through a 2 hour and 12 minute movie.

The most fascinating characters to me, the villains, are never brought into full illumination. While it does work thematically for those characters to remain unseen, sets up the story for a sequel that leaves the film feeling a bit unfinished. By the end of the film the minor battle for Helium may be resolved but the greater fate of the planets is left in question.

Unfortunately, Mars does not look very Mars-like. Instead it looks more like a span of desert likely to be found in Arizona. While the desert of this Mars is populated with an occasional oasis and shrubbery, there is not enough to grasp to give the full sense of removal from Earth.

The pseudo-science in this film could be a little maddening at times. Suspension of disbelief might require the viewer to shut off the critical part of the mind, as the many discrepancies in technologies just make meeting the alien races hard to believe.

Sadly, little use was made of the 3D effects. Considering the considerable amount of fighting and such in the movie, much more could have been done with 3D effects.

Overall, this is an action movie with a romantic subplot. The science fiction elements don't really add much and the ending of the film will probably beg more closure for the more critically-minded. While enjoyable, it's not the kind of movie that you recommend highly to your friends--and with its well-known budget and promotional issues, it's safe to say that word-of-mouth could be the difference in whether or not the film succeeds. If you're looking for mindless fun for a few hours it's a great choice, but for something to talk about after the credits roll, I'd pass.