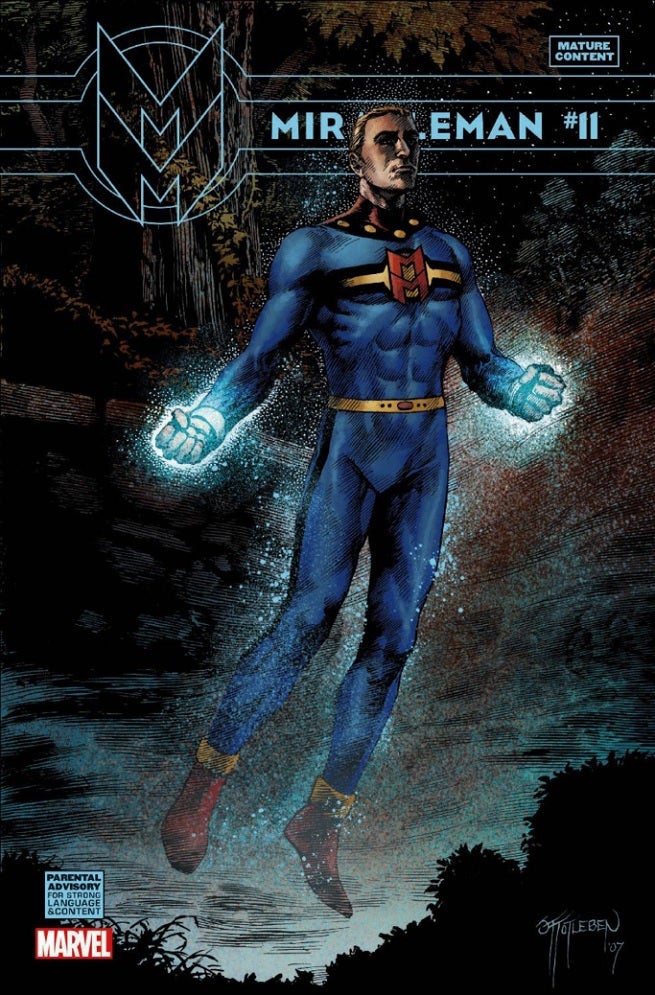 Going through this run, the element that stands out the most from issue to issue for me has probably been the artwork. I say that because while Alan Moore’s writing has been almost uniformly superb after hitting his stride a few issues in, the art has been handed from one individual to another with varying levels of quality along the way. As such, it has caught my attention issue after issue for good and for ill. This issue finds John Totleben taking over art duties from Rick Veitch and the contrast between the two at this time in their careers is stark.

Whereas Veitch’s work felt largely sketchy and ill-defined, Totleben’s work is much surer and successful in my opinion. Frankly, it’s gratifying to see Totleben and Moore together as I have only recent read Moore’s run on Swamp Thing where the two collaborated to great effect. Their work here is no less impressive. Here again though, it is interesting to note the contrast between Totleben’s abilities back in May of 1987 (coincidentally the very month when both I myself and the content of this issue were born) and his current mastery of his craft. The cover of this issue, seemingly produced in 2007 and thus likely not originally intended to serve as a cover in this reprint series, is beautiful and demonstrates that Totleben has grown significantly as an artist in the intervening years.

Still, Totleben’s work has an almost immediately recognizable style both back in 1987 and today. I’ve always found his use of shapes consisting of parallel lines to provide shape, shading, and texture to be an interesting hallmark of his work. While I do not always find it successful, sometimes leaving faces looking flat or ill-shapen as with Johnny Bates early in this issue when he rests his head on the shoulder of his nurse, it does give Totleben’s work a distinctive look which I appreciate.

Really, it is difficult to find a page or panel in this issue which one could truly call unsuccessful. Almost everything in this book is very well rendered and the panel layouts are quite engaging. In particular, I appreciate how the calmer, more orderly events are depicted with standard, grid-like layouts while the fight scenes are given a more frantic and kinetic feeling with panels strewn and jumbled about the page as though the force of the blows delivered had knocked them off-kilter. As a reader, I really do appreciate touches like this from an artist. I think it also worth noting that the title page is particularly well-conceived and executed and oddly enough puts me in mind of a classic heavy metal album cover.

Moving on to the writing, the biggest deviation from past books and chapters, this issue starting “Book III: Olympus” and consisting of “Chapter One: Cronos,” is that Miracleman himself is now narrating from the future as he records the events the reader is viewing. It’s not a bad choice for a framing device but it does suggest certain elements of the narrative yet to be told. Specifically, his narration coupled with the fact that he is now writing from his own personal “Olympus” removed from humanity does not bode well for his wife Liz. Likely this is Moore’s intentional foreshadowing but I’m uncertain of what this accomplishes and whether it will ultimately soften the blow of Liz’s eventual fate, presuming that I am interpreting this correctly, rather than strengthen its impact.

If in noting the book and chapter titles you presumed that there would be allusions to the Greek pantheon and antiquity’s conception of their installation in Olympus, then you guessed correctly. As the Greek gods usurped power from their forebears the Titans, so is Miracleman cast as usurping the power of the alien race from whom the ability to switch back and forth from different forms with the use of a trigger word was gleaned. It turns out that the brother and sister from previous issues who spoke in green and purple speech balloons are in fact members of this alien race known as the Qys, named in the back matter but not in this actual chapter of the story.

Perhaps the most intriguing element of this parallel between Miracleman and Greek mythology is the statement he makes as he sits down in the framing section of the narrative occurring in the “future” of 1987. He says, “I have legends to write; tales of how it feels to live in a mythology.” I find this an amazing apt statement and one with even deeper meaning when considering the comic form. As one might be aware, superhero comics are often referred to as a sort of modern mythology. As such, Miracleman is almost claiming a kind of self-awareness here that his story has meaning beyond himself for those of us currently reading it. From a certain perspective, Miracleman could almost be acknowledging that he is in fact living in a comic book. I applaud Moore for taking these connections and playing with/highlighting them so effectively.

Moving on to the main content, this chapter depicts the Qys attacking Miracleman and while one focuses on destroying him, the other goes after his wife and child after learning of the child’s existence by reading his thoughts. Miracleman is unable to defeat the creature occupying him as with every form he destroys the Qys seemingly can call for another while he is restricted to the forms of Mike Moran and Miracleman. As it turns out, Liz and Winter are saved by the sudden appearance of Miraclewoman, whose existence has not yet been justified or explained. Given that time travel is apparently possible in this reality as evidenced by a past back-up story, I would hazard a guess that this is Miracleman’s daughter from the future but I have no evidence of that beyond a hunch.

This is an enjoyable and intriguing chapter but I do take issue with a few elements of Moore’s storytelling. First, I find it odd to have three different types of narrative captions. The one type is perfectly clear as Miracleman is recording these events in a book and the light green captions often showing his stylus and/or him sitting at a desk are indisputably the words that he is actually setting down in his book. However, we also have captions in light blue boxes as well as unboxed and uncolored captions, both of which seem to be essentially the same narrative voice. It seems unnecessary and potentially confusing to make them visually distinctive when there is little to no distinction to actually be made between them.

My other minor complaint is that Moore’s lofty and somewhat needlessly ornate prose from the earliest chapters of this series is re-emerging. I don’t find it as problematic here because it is supposed to be Miracleman’s voice and as he has seemingly embraced his status as a sort of god above humanity, I can believe that he would have these sorts of lofty ideas. As such, I can accept this more than I can swallow Moore simply flexing his linguistic and intellectual muscles in the narrative captions as was done previously. Still, when considering peafowl in a zoo, I can’t help but roll my eyes slightly at this bit of odd imagery, “From the gloom of the peacock enclosure came the sound of women sleepwalking, the hems of their nightgowns rustling, dragging across the gravel.”

Still, I have to give credit to the narrative captions in one particular place. As Miracleman is being pummeled by one of the Qys and the other is heading for his family, Moore provides an intriguing method of splitting the narrative and conveying both the beating and the path of the alien toward his wife and child. While the artwork depicts the latter, the narrative captions convey Miracleman’s experience of the former. There is something engrossing about reading the fight while watching the slow march of seemingly inevitable death toward Liz and Winter. It is also delightful that the narrative caption describing the Qys that Miracleman is fighting using a trigger word occurs in the same panel where the other Qys uses one at the Moran home’s door. Taken altogether, this is an immensely effective page and I applaud Moore and Totleben for this lovely composition.

So, will the back matter be as effective as the story itself? Not quite but I find it more intriguing than last issue. With a new artist, I’m less hostile toward the idea of sharing pencils and inks, and I find it interesting to see the original cover to this issue as well Totleben’s revision of that same cover as a result of his dissatisfaction with its original form. Also, there is sufficient progress and refinement between Totleben’s pencils and inks that it is actually interesting to see both side by side.

As for the Marvelman reprint, we get another part of the narrative that was shared last issue. It’s a pleasant enough addition though I can’t see why Marvel has taken to providing parts of a multipart story when previously they had been printing stand-alones. Personally, I much prefer the latter. Still, given that the artwork provided is much more illustrative of Totleben’s craft than the previous was of Veitch’s, I’m happier with this back matter. That being said, I’m not going close this review without repeating my call for text pieces putting this work in context and reflecting on its importance to the form of comic books.

Taken as a whole, this is probably the best issue of Miracleman since before Veitch took on art duties. There is very little to complain about and a great deal that is truly excellent here. For the record, I will repeat what I have been saying almost all along: Miracleman is an enjoyable and intellectually stimulating reading experience that no one should pass up. I would encourage anyone with even a passing interest to pick it up in trade and/or start reading the monthly issues.