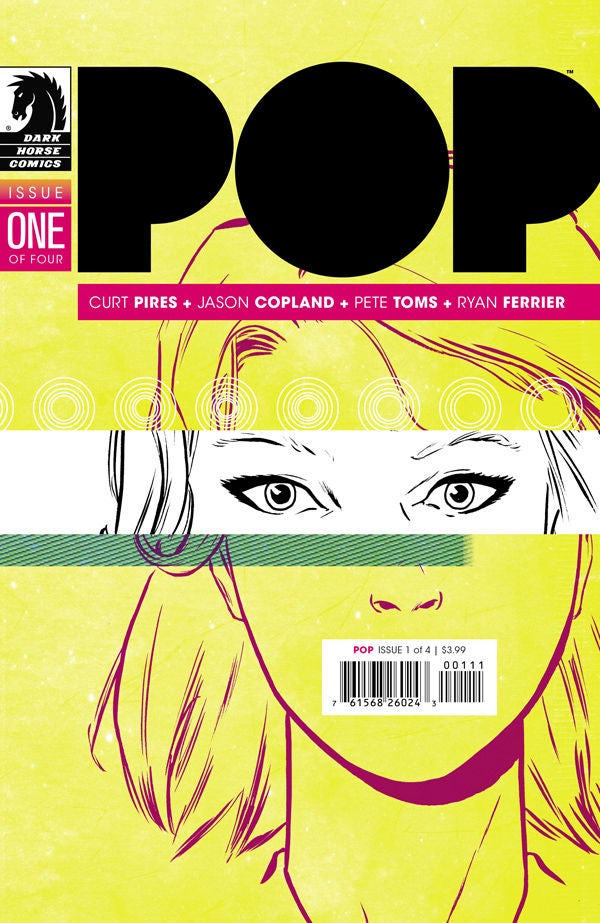 For me the greatest sin a comic can commit is to be boring. Comics is a medium with more potential than any other. There are no budget considerations and the language of pictures is universal. The only constraint a comic has is the imagination of its creator(s). Curt Pires has established himself as a writer with no limits to his imagination. In Theremin and LP, he's shown off a bold voice and aesthetic that is now being brought to Dark Horse in the new series Pop. Pires, Jason Copland, and Pete Toms have collaborated to publish a comic that is anything but boring.

I hesitate to describe Pop as being high concept, but there's certainly a core idea that is easily communicable: Pop stars are grown in vats and controlled by the elite. There seems to be more at play than that idea alone, but it is the easiest one line description of the comic available. It also gets directly to the heart of the ideas Pires, Copland, and Toms are trying to explore in this story. That being the presentation of celebrities is something manufactured, not the presentation of a real human being. Britney Spears, Mariah Carey, and Justin Bieber are all mentioned or included in the comic and are clearly not in control of their own destinies. Instead, they are puppets of corporations used to sedate the masses.

It's not a difficult metaphor to read into. It's plain as day that this is an indictment of pop culture. At one point a man in a suit screams at a potential pop star to "satisfy them" while a crowd of onlookers drool with their eyes glazed over. There is no subtlety in a moment like this. The comic is announcing what it is about and what it wants to say. It's not so much a thesis statement as a billboard with flashing neon lights.

The male protagonist of the story Cooper walks a line between pandering to readers and commenting on the audience. He is a bearded comic book storeowner who feels isolated in the world. There is no doubt that he is intended to act as a potential surrogate for readers. He is the everyman, someone who only looks onto popular culture without being part of it. Whether that is merely to attract a wider audience or challenge whatever audience the comic finds is unclear. His role as the comic reader within this narrative could not any less obvious though.

At the end of the comic, Dustin Beaver appears. Neither his name nor his appearance leave any room for second guessing what celebrity he is based upon. Two goons instruct him that he is to follow orders. His life is not his own and he should be grateful that he is permitted to live. This sequence reveals both Pires' tendency to go big and obvious, but shows some sensitive touches as well.

The commentary about child stars and the toxic effects of their environments and the adults around them is clear. Beib… Beaver has retired at the age of nineteen and has more in common with a sociopath than a teenager. It's a nasty display. Yet under all of that ugliness, there's a sense of sympathy. When attacked, the teenager loses all confidence and machismo. He is revealed to be a child. The violence enacted upon Bieber, as reviled as he may be by some readers, is not cathartic or funny. It's painful. The sequence shows him to be a victim as well as an offender.

There is a little bit of visual play occurring here as well. The two goons who come to attack Bieber are modeled after punk rock stars. The man is clearly Johnny Ramone and, although I'm not entirely sure, the woman appears to be Joan Jett. These two represent counter culture musicians who were incredibly influential, but rose to stardom outside of the mainstream in dive bars like CBGB's. The effect of this commentary is much more subtle. Are all celebrities eventually bound to the corporate machine mass-producing pop culture here? Or are they freelancers hired to take out their anger at the system upon the individual stars it produces?

While these sequences and others can be incredibly obvious, they're also exceedingly effective. Copland's character work easily conveys changes in expression and mood. He is able to subtly adjust seduction to anxiety with a few alterations to a woman's eyes and mouth. There's never any doubt as to what characters are doing and feeling, which allows the script to easily make some big tonal shifts.

One very panicked sequence erupts from a calm conversation and plays true to life, or as true to life as you can get with a mechanical centipede embedded in someone's arm. The characters falter with their words and are unable to effectively communicate. Their directions and thought processes are entirely communicated through facial expression. It's tight storytelling and reveals the strength of Copland as a collaborator.

Pete Toms' colors make the comic every bit as much as the line work. Bright, bold colors fill the backgrounds of many panels and affect strong emotional connections. Neon pink is used in panels with an almost nude woman, titillating the reader like they were standing outside of a strip club. Oranges and yellows are paired with moments of horror, feeling every bit as unnatural as some of the more surreal threats. Toms applies muted palettes, choosing the exact right colors for each panel and object.

Pop #1 is a comic that will make you think. It has a lot to say and wants to speak with a big voice. It tries to use all of the tools of the comics medium to make that voice as loud and effective as possible. Composition, color, dialogue, the creators are aware of all of these components and want to make them work in an engaging way. While they may not always succeed, the very attempt itself can be effective. Pop #1 is a lot of things. It can be blunt and self-involved, but it can also be astute and quite funny. It is always beautifully drafted and colored. The one thing it is never is boring. And that's the most important thing I can ask from a comic.