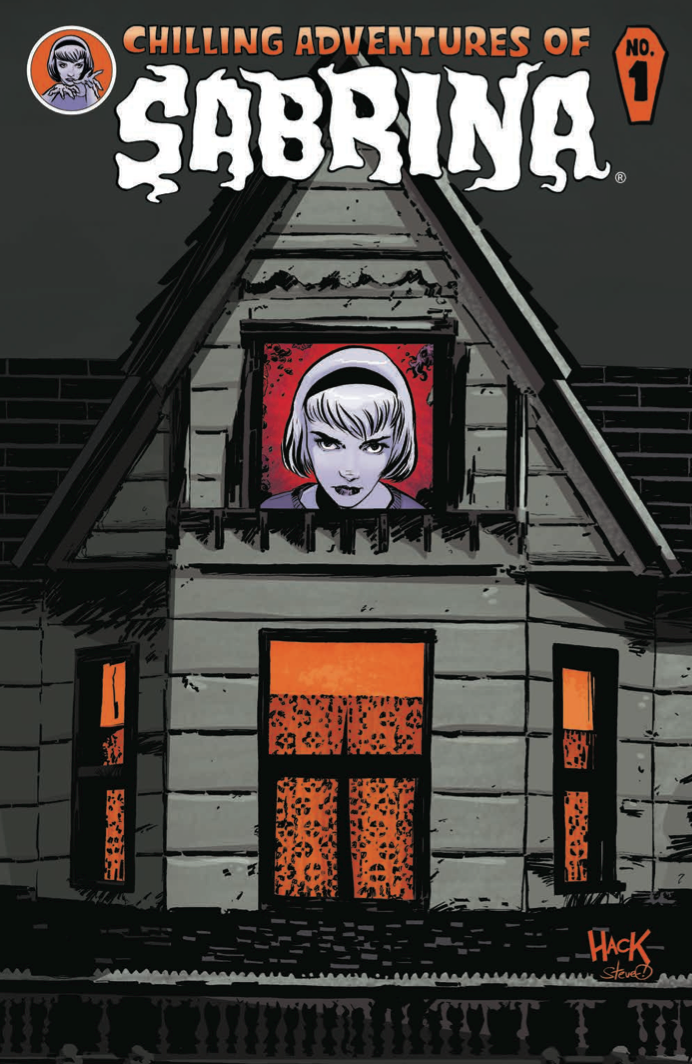 I love horror comics, but also tend to only enjoy a select few. It’s rare that something like Locke & Key or The Wake comes along and strikes a chord with me. If you would have told me a year ago that Archie Comics would be publishing not one, but two of my favorite horror comics in 2014, then I wouldn’t have just laughed you out of the room… You probably would have found yourself in a different state. But that’s exactly what has happened with the release of Sabrina #1.*

Writer Roberto Aguirre-Sacasa has composed this issue as an origin story. Readers unfamiliar with Sabrina or Archie Comics will face no problems in understanding the events of the comic, although their perception of Sabrina and the Archie-verse will be forever twisted. Aguirre-Sacasa, using a series of creepy timestamps, moves from Sabrina’s first birthday to her introduction to the perfectly normal town of Greendale and life as a high schooler. This highlight reel forms a complete picture of Sabrina, her family and friends, and their setting.

Aguirre-Sacasa steeps each of these highlights of childhood and adolescence with dark twists, ranging from minute bothersome details to massive, horrific concepts. Even when the point is something simple like finding a reason to move to Greendale, he maintains a focus on the horror elements of the book. Giant spiders and transformative trees are naturally blended into the story of a young woman finding her place in the world. That concept of adolescent growth is the conceit of this story. Sabrina is constantly discovering new things about herself. She is more powerful and influential than she ever imagined she could be. Unlike similar stories in the superhero genre, this one is interested less in empowerment and more in the mistakes of adolescence. Sabrina is already beginning to exert her powers (which are not subtly tied to her sexuality) in ways that will likely hurt both herself and those around her.

Although the comic puts plenty of work into successfully constructing an origin, it is at its best when composing its mood. There is a consistent feel to this entire issue. The tone of scenes can shift dramatically at times. The opening sequence presents a note that will disturb parents, prying into some of the most universal horrors across all societies. It presents both the loss of a child and the loss of one’s self-determination. Yet it is quickly followed by a birthday, which still features a terrifying moment, but ends on a bit of comedic relief that will create a genuine laugh. The connective tissue to these disparate sequences and others is a consistent mood that never lightens or disappears. It is a striking blend of H.P. Lovecraft and John Carpenter. There is an ever present darkness to these pages. No matter how humorous or horrific the events, there is a sense that everything is just slightly wrong. It is the mood of a decaying world, one where there really are monsters lurking just out of sight capable of destroying lives and shattering minds.

That mood and the visual motifs that reflect both Lovecraft and Carpenter are made possible through the outstanding work of Robert Hack. He has composed Sabrina #1 to reflect a similar aesthetic of EC horror comics. Page compositions are never overly complex, relying instead on the images and ideas within panels to convey the horror. Hack composes his pages in very simple grids that are easily read. The reliable use of grids creates a rhythm to reading Sabrina #1, one that makes changes in the grid more impactful. When Hack uses a large panel, specifically one full page spread, it is very effective. Larger panels build emphasis and create a sense of shock because he has steadily made the reader expect similarly sized panels. It’s an excellent use of space and one that goes back to the classic horror comics published at EC. These page compositions reflect that same effective utilitarian style of cartoonist Al Feldstein.

Within these panel, Hack evokes images that will stick with readers and encourage them to walk a little more quickly at night. Plenty of small oddities can be found throughout the issue. The inclusion of elements like a black cat and snake familiars help to establish a tone where strange things lurk in every room. Sabrina #1 may always be subtly reminding readers that this is a tale of horror, but it is not always subtle. Hack is at his best when able to cut loose and reveal the full extent of the terror that lurks beneath the comic’s surface. Early in the story there are images of Sabrina’s mother abandoned in a cold, grey cell at a mental institution with blood smeared across the walls. Scenes like this engage with the fears of readers openly. They are devoid of hope, presenting a world where monsters successfully prey on helpless victims. Sometimes those monsters just happen to be husbands who abandon their wives to incredibly cruel fates. In the final pages, Hack constructs a sequence that relies primarily on body horror. The very last panel is one that may haunt some readers, revealing a monstrosity comparable to The Corinthian in The Sandman.

Hack’s colors are an important component in holding the story and mood together. He and Aguirre-Sacasa never attempt to evoke a sense of realism, their world is a twisted funhouse mirror reflection of our own and the colors show this. There is a monochromatic haze of yellow and orange that hangs over most pages. Other colors are allowed to emerge from beneath it, but are stifled by these fall hues. They evoke a sense of that season and the associations that come with it. Beyond the obvious connection to Halloween, there is the thought that the sun is setting and the days are growing shorter. No matter what date it is, Sabrina exists within the realm of fall where the world is preparing to go dark and die.

The haunted mood of Sabrina #1 creates a promise for much more to come. This issue reincarnates a children’s tale as a horrific new version of itself, one that is capable of scaring readers, new and old alike. With Hack’s art and colors guiding Sabrina ever closer to the darkness of her origins, there are bound to be a lot more thrills and chills to come.

*The other horror comic I’m referencing is, of course, Afterlife with Archie, a series written by Aguirre-Sacasa and drawn by Francesco Francavilla that started strong and has managed to improve with every subsequent issue.

REVIEW: Sabrina #1 Establishes Archie Comics As THE Place To Go For Horror Comics