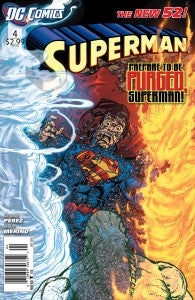 Readers who suspected that the upcoming Superman creative changes might be at least in part a result of George Pérez having trouble hitting deadlines may have gotten a little bit of validation with this week's Superman #4. While the script and layouts remain strong, the finished art on the title--which we named one of the ten best New 52 titles to come out in 2011--seems muddier and clunkier than it had in the first three issues. That said, the over-arching story of Pérez's six-issue arc took a major step forward this month, with the revelation at the end of the issue that the villains for the first three issues--who appeared in their first appearances to be something like elemental gods--were in fact some kind of biomechanical beings who were, at least by their own accounts, programmed by Superman. The Man of Steel himself, of course, has no recollection of having done so and didn't know until about halfway through the issue that they weren't just the organic beings they had appeared to be. How the story plays out remains to be seen, but the idea of the villains being Kryptonian androids raises some interesting questions, especially in the context of reinventing familiar characters for the New 52. The use (twice!) of the word "eradicate" by the characters certainly suggests a possible connection to The Eradicator, a Kryptonian computer designed by Superman's ancestors which took on a sentient life of its own and tried to "reprogram" Superman more than once to be more Kryptonian. That bears some resemblance to the cliffhanger at the end of this issue, which might suggest that it's a likely scenario, but incoming co-writer and artist Dan Jurgens--who wrote Superman from 1991 until 1999 and used The Eradicator regularly during that time--said during the DC All Access: Superman panel at the New York Comic Con that he had no plans to use The Eradicator (or indeed any other characters and concepts he used a lot during his previous run) during his upcoming turn on the book. That may not completely eradicate (see what we did there?) the possibility of these characters having a connection to the character, but it certainly cast doubt on any sense of certainty that might come out of the above coincidences. The more likely (or at least easy) answer seems to be that these creatures are just a reimagining of the Superman Robots from the Fortress of Solitude. Those have been known to go "off-book" in the past. Robots! Who needs 'em? Of course, it could be anything--given that the language centers were corrupted, and Superman seems to be having memory problems himself, they could have been programmed by anyone to do anything and it could fit the story. All in all, Superman remains one of the best-paced and most entertaining reads of the DC Universe, even if the art doesn't look as good as it did last month.