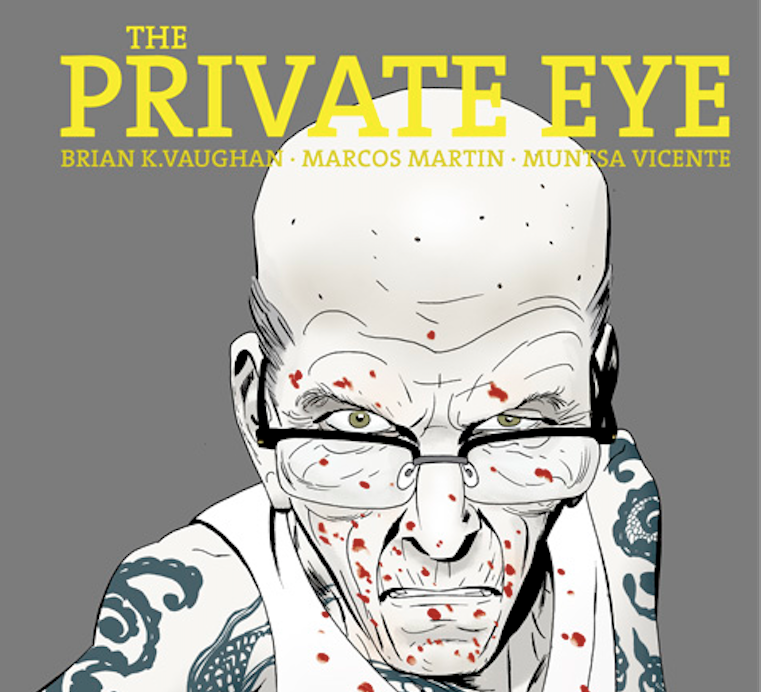 There’s nothing quite as exciting as receiving a new issue of one of your favorite comic books. It’s even better when it’s a surprise. Wednesdays are great. I love new comic book day and always anticipate picking up my favorite pulls. However, there’s nothing quite as thrilling as seeing a new issue of an independent comic arrive unannounced. You know creators working outside of the Diamond system have put effort into delivering their stories directly to you. That’s why this Wednesday was a particularly noteworthy new comic day. A new issue of The Private Eye was released at 8pm EST.

For the uninitiated, The Private Eye is a digital maxi-series written by Brian K. Vaughan (Saga, Y: The Last Man), drawn by Marcos Martin (The Amazing Spider-Man, Doctor Strange: The Oath), and colored by Muntsa Vicente (Daredevil, She-Hulk). It is only available on their own website called Panel Syndicate, where it is offered in DRM-free PDF, CBR, and CBZ files. As for the cost, you decide. They recommend paying at least one dollar, but it can be downloaded for nothing at all. In fact, Vaughan has made a point of encouraging educators using the comic to not pay for it.

I put down five dollars every time a new issue is released though. It’s worth every non-required penny. The Private Eye is just that good.

The biggest struggle in The Private Eye #8 is caused by the long delay between issues. Vaughan has always excelled at concluding his comics with cliffhangers. That means each subsequent issue typically starts by picking up the pieces of whatever has come before. It makes for strong, propulsive storytelling, but also causes some struggles with the episodic style. The new issue begins with a group of brand new characters gathered around the aftermath of a hospital shootout. Without having read The Private Eye #7 recently, it’s difficult to recall the exact outcomes of the incident. Who shot who? Who lived? Who died? In many ways, readers are tasked with working alongside investigators to reconstruct the scene.

That struggle doesn’t last for too long though. As the Fourth Estate works through the scene context is added and familiar faces come back into play. There were a few points where I felt it necessary to flip back to the previous issue, but the broad strokes of cause and effect are all laid out. The issue picks up momentum as it goes along and after the first few sequences does not lose it again.

The series is quickly moving towards its finale and that shows in the pacing of The Private Eye #8. Whereas previous issues were focused on a variety of sub-plots and characters moving independently of one another, here everything is beginning to converge. Each character is acting of their own accord, pursuing their own goals, but those separate motivations have become so intertwined now that they are pulling together like a knot. There is a sense of inevitability that surrounds the events of this issue. The machinations of P.I., DeGuerre, and the Fourth Estate have all set the stage for a conflict with no obvious resolution, but lots of potential tragedies.

With that in mind, The Private Eye #8 clearly functions as a transitory issue. It is setting the stage for a finale. For many episodic stories, both in comics and on television, this sort of installment is generally considered a necessary evil. Here, however, it functions as a compelling link in the story chain. Vaughan and Martin have spent the entire series building stakes, humanizing characters, and crafting motivations. In telling the story, they have remained firmly aware of the legwork necessary to invest readers in the plot and to construct drama. Now that it is time to establish the climax, they can focus on how the characters reach that point, instead of providing last second twists to make the story more exciting. The Private Eye has been exciting and propulsive since its first issue and continues to be here.

Much of that propulsion comes from Martin’s horizontal compositions. The Private Eye has been optimized for reading on computer or tablet screens. Pages are closer in proportion to a film than a standard American comic book and emphasize movement from left-to-right instead of top-to-bottom. In the first half of The Private Eye #8, there is a lot of dialogue-heavy sequences focused on investigation and planning. These sequences, with some top-notch lettering, are easily read. Yet it’s in the second half of the book that the pages really come alive.

In these sequences, focused on quiet moments like P.I. sneaking into a warehouse and a truck rolling across the outskirts of L.A., Martin pulls readers across the page. Extra long panels help to provide a sense of isolation to settings in the desert, while establishing a strong sense of horizontal momentum. There’s also an excellent action sequence where almost all of the action is implied. Martin reveals just enough information for the reader to understand what is happening. The sequence takes place in the dark and the understated connections between cause and effect help to simulate that darkness in the act of reading.

Part of what makes The Private Eye such a compelling comic is that it’s not only a well-crafted and beautifully told story, it’s an exceedingly smart one. Vaughan and Martin are not working to shout their opinions about a complicated topic at the reader. They are reflecting and meditating on the multi-faceted nature of the information age and, in turn, providing reader’s new perspectives in order to do the same.

A conversation between Melanie and DeGuerre at the end of the issue serves as a sounding board for conflicting assessments of the internet and its effects on information and privacy. Its as close as Vaughan has come to directly addressing the themes of the series, but works because the dialogue never actively preaches. Neither character is a straw man, instead they hold strong opinions and speak to the reasons they hold them. Elements of truth and naivete can be found on both sides. It is a sequence that actively encourages the reader to consider the subjects and seek their own understanding.

So for those of you already reading The Private Eye, I’m sure this issue is already downloaded to your computer or iPad. Enjoy

For those of you unfamiliar with The Private Eye, you have my envy. Not only do you get to discover this series for whatever price you choose, but you still have time to sit back and await that surge of excitement when an e-mail or tweet or facebook post announces the arrival of a new issue.

In the world of The Private Eye, the internet may be something to fear, but I can’t imagine giving up on it and all of the exciting comics that come with it.

REVIEW: The Private Eye #8 - "Worth Every Non-Required Penny"