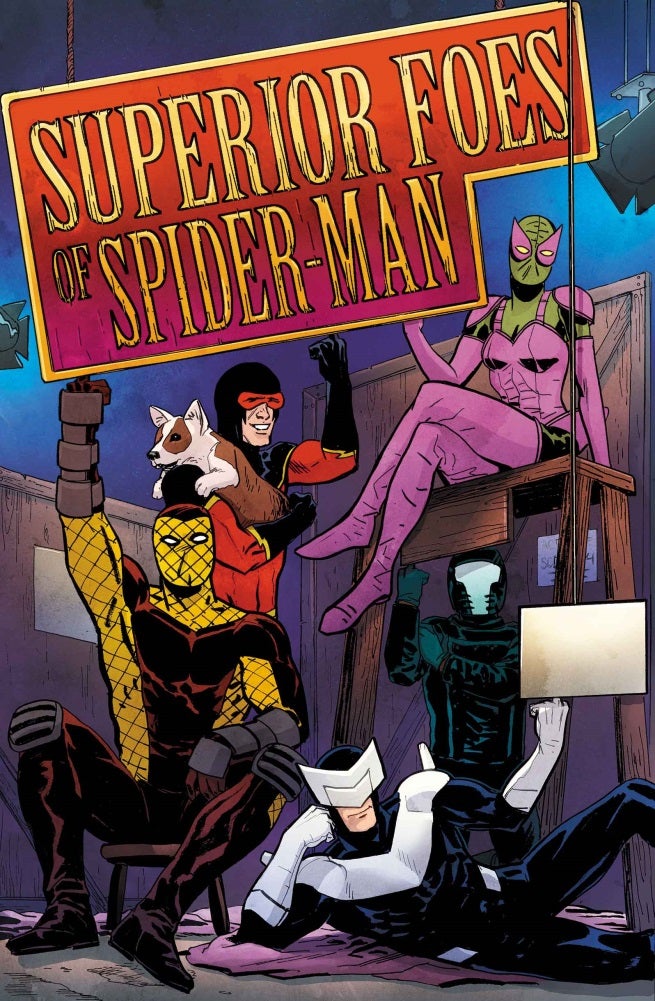 The Superior Foes of Spider-Man has been cancelled. Steve Lieber and Nick Spencer have been producing one of the funniest and best told comics not just at Marvel, but all of comics-dom for the past year and a half. Every issue of Superior Foes they've made has been laugh out loud funny and filled with more quality material than many comics include in an entire storyline. There are only two issues left, but Superior Foes #15 shows that it will be going out on top, even if there's nobody around to notice.

The first thing I found myself thinking about when this issue ended was how much had happened in only twenty pages. I started by counting on my fingers and had to remove a shoe before I was done. Lieber and Spencer take full advantage of every single page. Spencer understands that stories propel themselves. Events naturally follow one another, every action either causing a reaction or being interrupted by an outside force. Each beat of the issue can be connected by the words "therefore" or "but", never the random connection of "and then". That reflects a great model of storytelling proposed by Trey Parker and Matt Stone. Everything flows; even tangents showing characters not directly connected to the central plot are based upon events in previous issues.

By the end of the issue, everything is in place for a grand finale that already feels bigger than anything this series has done before. When you look at where the story starts and ends, it's incredible to see how much has changed. What's even more impressive though is to see how those changes all flows naturally from the story and never feel rushed or unjustified. In an age of decompressed comics, Superior Foes makes for an exciting change of pace.

Lieber makes this pacing possible by fitting a lot on every page. The opening sequence alone reverses the story's momentum multiple times in very little space. The status quo is constantly changing and Lieber understands how to portray those changes very effectively. He also manages to pack in plenty of gags without making them overwhelming. Panels that are needed to convey actions or changes that are not exciting in and of themselves often feature a little extra flair that will put a smile on reader's faces. When Overdrive is converting a wheelbarrow into a backhoe, the sound effect in large purple letters is "BACKHOE!" Small touches like this make every page of the issue pop.

When the issue ends and three mounting twists are revealed setting up the inevitable climax and packing the final page with tension, Lieber allows these moments to breathe. They each receive their own page and are simply laid out to focus on the events in each one. He has the ability to pack a page with action and jokes, but also understands the importance of pacing. The wackiness and gags of earlier sequences are mostly left aside here to create an impactful ending.

The Superior Foes of Spider-Man may be ending forever soon, but it's still continuing to grow and improve. The amount of jokes, action, and plot all laid out in this issue alone displays the series many strengths. With only two issues left, it still manages to find new places to go and stunts to pull. It's a comic that will be good to the final page.

REVIEW: The Superior Foes of Spider-Man #15 - "A Comic That Will Be Good Until The Final Page"

Boruto: Naruto Next Generations Has Filler On The Way And That's Ok