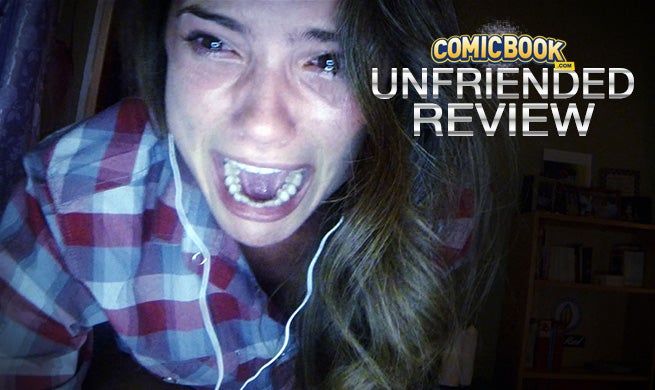 The formatting of Unfriended will either draw you in out of curiosity or make you rule any chance of watching this movie out completely. The fact that the entire film takes place on a computer screen is not at all the problem, though.

When the movie starts, it is easy to be skeptical of the computer screen being used to tell a story. Laura Barns (Heather Sossaman) had a bad night at a high school party. She got way too drunk, embarrassed, violated, and literally left in the dirt. Of course, it's all on video and shared on the internet because that's the way today's teens work according to this movie.

Anyone who has ever read a comment section knows that the internet can be a cruel place. Laura learned this as comments poured onto social media demanding that she kill herself. Her skin wasn't thick enough to fend off the remarks. She claimed her own life and that, too, was on video.

Blaire (Shelley Hennig) watches the video on her computer, a year later to the day, in a surprisingly clever form of exposition. From there, her night continues as she Skypes her high school clique, comprised of her boyfriend Mitch (Moses Jacob Storm) and other buddies who each meet their own millennial stereotype.

Things go awry when the user "billie2277" pops into the Skype session with no invitation or video to reveal themselves. Things get really weird when Laura Barns starts Facebook messaging Blaire and Mitch and the computers stop performing normal tasks. Of course, the youngsters play along, initially accusing each other of hacking their dead "friend's" account.

As suspected by the audience, billie2277 reveals itself to be dead girl Laura and demands the teens play games with her or they die. Surprisingly, the implausible supernatural death threats are what help the 88 minute movie find it's stride.

The formatting of the movie was genius. The found footage/computer screen layout was not the only way this story could be told, but the best way. The computer functions failing and being controlled by Laura created the supernatural's creepy presence before any death or violence did. Having said that, it's not a style we should see again for a very long time. Once is enough -- again would make the format dreadful.

The entire movie made me feel one way: uncomfortable. Is that a good thing for a horror movie? Yes and no. Horror movies should scare the audience but it was more wanting the movie to end than being scared. The violence didn't pack nearly as much blood and gore as a Saw or even The Purge. Most times, the computer screen would buffer or cut in and out while any of the characters mutilated themselves under Laura's possession.

Rather than violence creating the discomfort, it was wondering which character I would have to watch destroy themselves next. Each horrific death will stick in your memory because it is mostly left up to imagination with flashing imagery to help to paint it. The ghastly fact is, though, that the characters are 17, maybe 18-years-old. They haven't even been to prom and we have to watch the horrific events that unfold.

The banter between the clique was realistic and high school students or recent graduates will relate to it, but it doesn't provide concrete characters for a mature audience. As the ghost of Laura forced each player to reveal their awful secrets, the group started to hate each other despite the fact that they've been watching their friends kill themselves. Apparently, lies about an eating disorder trump watching your friend swallow a hair straightener.

Hennig plays a true teenager. Blaire's choices are not always acted, sometimes they're typed, but when they are, Hennig breathes great life in Blaire. She is truly petrified, saddened, angered, and confused throughout the film thanks to Hennig's memorable performance even with Unfriended's unconventional style. Storm does a satisfying enough job with what he's given and works it all into the web cam performance.

Right up until the end I was hoping there would be a twist or explanation for what was going on. There is a bit of reveal towards the end of the film that will hit those who buy into the plot, but for folks looking for something meatier, Unfriended is not it. Unfriended will earn chatter and consideration from the millenials featured in it's stereotypes, but for most others will stumble and fall short.