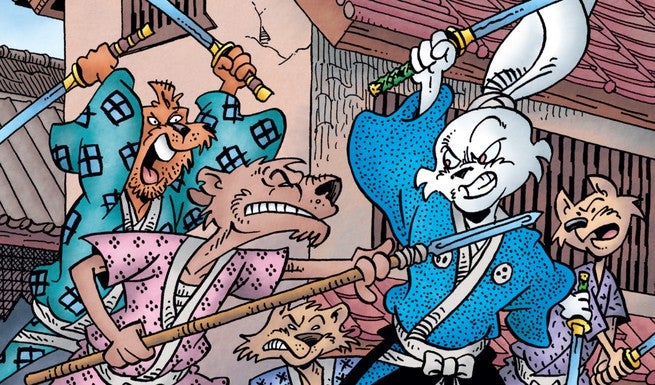 It’s not everyday that you can hand someone the 164th issue of a comic book that also happens to the second chapter of a three-part story and tell them it’s a good starting point. In fact, that exact situation might never have occurred before in the history of comics. Nevertheless, it’s the truth about Usagi Yojimbo #164. The issue opens with the ronin rabbit knocked unconscious at the feet of bandits and quickly dives back into the ongoing action and mystery of “Mouse Trap”, while making every character knowable, every plot development accessible, and every twist exciting. Like almost every issue of Usagi Yojimbo before it, this one proves Sakai to be a master of cartooning and storytelling: a true comics artist’s comics artist.

The introductory action sequence is a perfect example of how less is more when delivering a top-notch swordfight. Sakai breaks every set of panels into a clear set of actions and reactions without becoming hung up in minute details or framing. Across four pages, only a single pair of panels present a similar perspective in sequence. Typically it shifts, even if only by a few yards to optimally present the action and avoid any stagnating scenes. The focus is always on what is most important: a wide lunge by Usagi, then a moment of recovery against building odds, and then the fateful reappearance of a friend. Even for a reader unfamiliar with who is within these pages, it would be impossible to avoid being pulled into the action upon them.

That’s not to say it’s difficult to learn who these characters are. From the sniveling snitch who plays the smallest of bit roles to the heroic Usagi and Inspector Ishida, every individual is defined clearly by their actions and expressions. Usagi’s dual nature as a fearsome warrior and lonely philosopher are as well distilled here as anywhere across the prior 163 issues. Sakai emphasizes bold expressions distort faces to reveal what lies beneath them. Perhaps the most intriguing element of this particular tale comes in the form of Nezumi, a Robin Hood-style thief who hides his face beneath a mask. Squinting eyes and bared mouth make him even more of a cypher, allowing for him to remain a wild card in this story filled with obvious heroes and foes.

“Mouse Trap” is not the high watermark of Usagi Yojimbo comics. It doesn’t reach the epic heights of “Grasscutter” or the delightful notes of Sakai’s most bizarre one-shots, but that doesn’t detract from the joy of reading the issue. Instead, the simplicity of the story highlights what makes this series consistently great. There are no tricks to be found in these pages, just the masterful work of a very skilled cartoonist.

Usagi Yojimbo #164 delivers every piece of its story elegantly. Characters are distilled into the necessary number of lines needed to convey emotion. Action crystallizes the most essential moments into rapid excitement. Even the dialogue is used to simultaneously move the story forward within each panel while filling in new readers. This may not be the best single issue of the year, but it provides a standard to which every single issue of ongoing comics ought to aspire.

Review: 'Usagi Yojimbo' #164 Is a Stellar Issue of an Ever-Expanding Epic