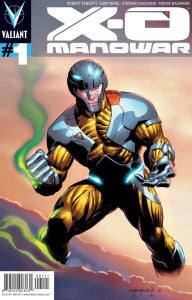 Wait! Check out our interview with X-O Manowar writer Robert Venditti before you continue! I remember my first comic book convention; in my hometown of Syracuse, New York, I met local artists Bart Sears and Randy Elliott, who had just taken a gig on Turok for Valiant Comics, and it was HUGE news both locally and in the comics industry. The first issue of Turok: Dinosaur Hunter came with a chromium-enhanced image on top of a cardstock cover that was textured so you could ACTUALLY FEEL THE DINOSAURS! Sadly, Turok isn't part of the new relaunch of Valiant Entertainment but X-O Manowar, the series that always seemed like creatively the best of the bunch (with names like Mark Waid and Joe Quesada gracing its pages), is--and it's a really terrific read. This time around, it's got Robert Venditti and Cary Nord on the job, and they're playing near the top of their games. Forget the odd talking cover. Check your skepticism at the door; this isn't just a '90s nostalgia trip. X-O Manowar is a good comic by almost any objective yardstick. Artist Cary Nord's style, especially early in the comic, owes something to epic battles rarely seen in mainstream comics. It's likely that there will be a lot of comparisons to 300 in those first scenes, especially because the point-of-view characters seem hopelessly outnumbered, but that's not entirely fair. it's more like any other swords-and-sandals epic ever made, without the odd stylized tendancies of Miller's work. Instead, Nord's figurework in the battle scenes is evocative of fine arts and in the close-ups, very Kirby influenced with a bit of Stuart Immonen thrown in for good measure. It gives the characters an epic feeling, and the scenes a sense of beauty while doing great things with negative space. It's not a flawless look on the character, but certainly it's easy to see why the publisher rushed to lock him into an exclusive deal; this kind of book could easily sell him to the Big Two as a viable commodity. There's one small failure in terms of  visual storytelling, but it's righted within the page and doesn't impact enjoyment of the issue. Venditti's writing also touches on the operatic; it goes from 402 AD, and a big Spartacus/Braveheart style rallying speech, to a desperate siege on what turns out to be the wrong enemy and sends the story spiraling from an historical epic firmly into the world of science fiction. The character work is nice along the way, too, with laugh lines in all the places they're needed most. The story moves quickly, but our hero is as single-minded as he indefatigable. Even as he's facing a truly bizarre and terrifying situation, his mind continues to drift back to the last group of people who wronged him and what he can do to right that injustice. It's the kind of black-and-white thinking that's at home in these "barbarian" epics (see also Brian Wood's excellent Conan the Barbarian and Brandon Graham's groundbreaking Prophet), and it sets the stage for a long, bloody and exciting first arc. After all these years, waiting another month for #2 will seem like nothing.