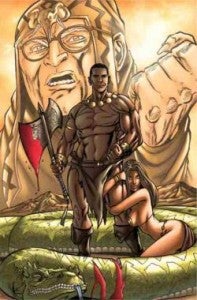 Have comic books gotten out of hand? Are there just too many comic books out there now that are based on real people? If the recent appearance of comics based on the lives of Barack Obama, John McCain, and Sarah Palin were just the beginning, then can fictional books such as the recent addition Barack the Barbarian be a sign of future endeavors? If that's the case, then are any real celebrities or politicians safe? Out of the recent group of headline makers, only a few have shots at having their lives exaggerated, only slightly of course, in four-color fabulousness!

With that said, here are our picks for celebrities who could make for interesting reading, using powers based on some of their best (worst?) attributes, in the style of Barack the Barbarian.

The Wonder Twins Jon and Kate

- Yes, Jon and Kate Gosselin are currently the most publicly troubled married couple in America, but that doesn't mean they couldn't provide entertainment in the pages of their own series! In issue one, after years of not touching each other, they accidentally have contact and discover that each has the power to transform. Jon, just as on the show, into the form of an animal or object with no shape, spine or firm structure, and Kate into the form of any predatory bird with a particularly festive crest of hair. The first issue shows them saving their brood from the clutches of a dangerous villain, Jon in the form of a jellyfish and Kate as a falcon. And who would that villain be…

- Not content to have just fourteen children, The Adventures of Doctor Octomom would follow real life mother of recent octuplets, in addition to six other children, Nadya Suleman in her quest to draw more and more children, preferably those of multiple births, into her clutches to raise as crazily as she would like. Perhaps her first issue could show her harnessing herself with a device similar to that of Doctor Octopus, but instead of destroying Spider-Man, she focuses on using those extra arms to harvest babies, hence her direct conflict with the Wonder Twins mentioned previously as she sets her sights on gathering up a perfect set of sextuplets.

- The Donald suits up, combover and all, in an effort to preserve his stance as one of most blustery figures in TV and media. His ego being too big to allow anyone else to be his bodyguard, Trump dons the suit of the Iron Mogul and makes it his mission to take out any threats to his place in the spotlight. One of his earliest challenges comes in the form of Madame Masque, the dangerous female with the unmoving metal face, only this time it's the dangerous plastic face of Joan Rivers. After a fierce battle, the two put aside their differences and decide to launch a home shopping network, dedicated to promoting skin treatments and hair care products for the overexposed.

- Blustery pitchman Billy Mays confesses to the public that the secret to his loud, obnoxious voice is really a mutant power, much like the X-Man Banshee's. Once a judgmental public turns on him, Mays commits himself to forming a group of young men and women who possess gifts in the art of sales pitching. Forming the Oxy-Men, dedicated to one of his best selling products, Oxy-Clean, Mays trains and teaches these youths to be prepared to sell bizarre products to a world that may grow to hate and fear them. In one of their first adventures, the group is sent to take down meglomaniac Ron Popiel, a TV salesman with no regard for the humans who have left him behind as a salesman of the past.

- Angelina Jolie is the focus of this comic that centers around the globe-trotting adventures of a celebrity popping up in various parts of the world to adopt children of different backgrounds and nationalities. Adventure ensues as she uses her skills and attributes to cut through red tape, childhood vaccines and the watchful eye of the tabloids. Her main rival in her adventures is Queen Madge, Madonna, a woman with a fake British accent of her own, bent on her own plans of child conquest. In a race around the globe, Womb Raider is able to once and for all defeat Queen Madge by denying her access to her ancient anti-aging chamber, thus guaranteeing access to all the children for herself.

The Man of Steele

- Newly appointed Republican National Committee chairman Michael Steele assumed his identity as Steele: GOP Superman after the defeat of the party's champion at the hands of Doom's Day (AKA Novermber 4, 2008). Wearing his powers of influence and might, Steele goes to battle against the forces of Brainiac in his first issue. Brainiac, a being of supreme arrogance based on his intellect and insistence on his will being dominant, attempts to defeat Steele before he can even make his first move. In this case, it wouldn't be a coincidence if Brainiac were drawn just a bit like Rush Limbaugh. Steele goes on to triumph, hoping to pave a future for truth, justice and the Republican way!

- Out and proud singers Adam Lambert, Clay Aiken, Lance Bass and Lady Gaga find themselves in a bizarre recording studio accident that imbues them with spectacular powers. Deciding to band together, they become the Fabulous Four. Lambert gains the power of The Flamer, Clay gains the ability to shape his body in any form and takes the mantle of Claymate. Lady Gaga's outfits become even more exaggerated with this power, making her the Not-So-Invisible Woman. Lance Bass' ultra hold hair gel takes on growth properties and expands to offer a protective barrier around his body on command. In their first adventure, a threat from someone who seeks to control the actions of others through subtle, behind the scenes networking emerges known as the Puppet Master! Who else but former boy band manager Lou Pearlman would be here!?

While many, if not all, of these mentioned above will ever be made into a legitimate comic book, the issue of whether or not we can expect future expansion of the fictional realm to make more and more attempts to reflect the actual world of readers who pick up these books, looking for an escape. Perhaps too much of this could create a backlash of sorts, but in the meantime, it's nice to daydream!