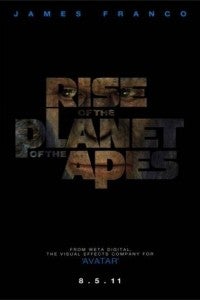 In a midnight opening in a limited number of locations on Thursday, Rise Of The Planet Of The Apes took in $1.3 million. While this number is a far cry from what superheroes, giant robots, and boy wizards pull in for midnight openings, it’s party darn good for a bunch of monkeys in their first movie appearance in ten years. It certainly puts the $700,000 that Cowboys & Aliens (with much bigger star names on the marquee) brought in last weekend to shame.

Deadline.com is calling the Friday box office for Rise Of The Planet Of The Apes at $15 million and is predicting a $40 million weekend. BoxOfficeMojo.com is even more optimistic and is putting the opening weekend box office in the $45 million range. One thing is for certain with the latest Planet Of The Apes movie already a winner among critics and exceeding expectations at the box office, look for 20th Century Fox to announce a sequel very soon.