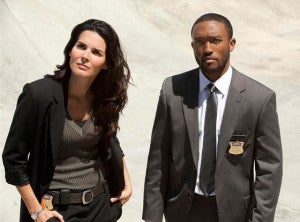 The second-highest-rated scripted cable show of all time--TNT's Rizzoli and Isles--has lost its captain less than a year after the highest-rated--AMC's The Walking Dead--had the same experience.

Of course, unlike The Walking Dead's Glen Mazzara, it sounds like Rizzoli & Isles's Janet Tamaro left the TNT drama on good terms and she will continue to develop new properties for the network.

Tamaro developed the series, based on a series of mystery novels by Tess Gerritsen, into a top-rated, female-led drama that was seen as a potential replacement for The Closer, which was then wrapping its long run on TNT. Ironically, most of The Closer's cast stuck around and joined Major Crimes, a spinoff which was recently renewed for a third season itself. It has never had The Closer's numbers though and that series--which had been the top-rated show in the network's history--would likely be sorely missed if Rizzoli & Isles hadn't come along and broken all of the records it set for the Warner-owned cable net.

“This is what we all dream of getting to do,” Tamaro said in a statement. “And I got to do it for four phenomenal seasons. I’m at the top of my game, thanks in large part, to this unbelievable experience and show. It’s time to challenge myself and develop new projects. TNT and Warner Horizon have been a dream to work with, and I look forward to doing it again. The heartache for me will be leaving the day-to-day working relationship with an incredible cast and crew.”

That cast and crew includes Angie Harmon, who not long ago tweeted a Photoshopped image of herself as She-Hulk and expressed a desire to play the part for real, and Smallville actor Lee Thompson Young, whose recent death forced a temporary production hiatus while writers were called in to figure out how to work without his character.