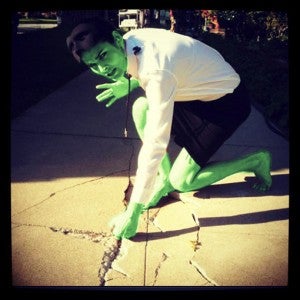 Actress Angie Harmon, of Law & Order and Rizzoli & Isles fame, is looking to trade in her ampersands for a hyphen and star as She-Hulk.

“I have to be her,” Harmon told Entertainment Weekly. “You don’t understand. I have to be her. It’s the best quote ever when The Hulk turns around and goes ‘I’m always angry.’ I was like, Ohmygod! I stood up in the theater and literally cheered. I did.”

Hearing the news, current Amazing Spider-Man and onetime She-Hulk comics writer Dan Slott tweeted that, if they decided to give Harmon a shot as a TV version of She-Hulk, he would write the pilot for free. That seems less likely that a cameo in The Avengers 2, though, given that Harmon currently stars as Jane Rizzoli, one of the titular crimefighters on TNT's Rizzoli & Isles, which will begin its third season on June 5.

The image at right is actually a photo that Harmon uploaded to Twitter as a kind fo proof-of-concept, which was then recolored and reuploaded by a fan. Given that She-Hulk is substantially smaller and less monstrous-looking than her cousin, it's a reasonably closer approximation of what fans might actually see, should her lobbying effort be successful. Maybe she should get together with Clark Gregg and petition fans to support them in the film, then petition Joss Whedon to come back and follow through on his desire to see more female Avengers. It's a fool-proof plan!