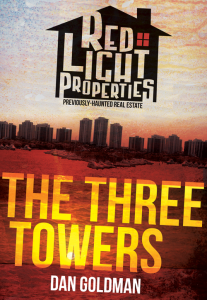 With a newly-remastered version of Red Light Properties: The Three Towers out on ComiXology today via Monkeybrain Comics and a collected edition coming out in January, everything is coming up haunted houses for Shooting War creator Dan Goldman.

The Eisner winner has been working on Red Light Properties for quite a while, but with a TV deal somewhere on the back burner and the series' first collected print edition coming from IDW Publishing, the time has presumably never been better to be reading up on the goings-on at our favorite haunted real estate firm.

Goldman joined ComicBook.com briefly to talk about today's "issue," actually a remastered, relettered and re-released version of an existing RLP story, and the collected edition, for which Diamond's Final Order Cutoff is coming up soon--so order it. The information is below.

Okay, on to chatting about the book, a bit... 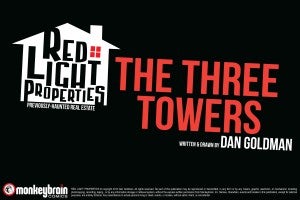 Dan Goldman: Nope, but he is old enough to burst into the office first thing in the morning and greet his parents singing like a cool kid. Honestly I never heard Robin Williams when I wrote/lettered/read that moment.

ComicBook.com: That's how I started out with The Three Towers. It's a decidedly lighter tone than some of the previous ones, isn't it?

Goldman: I suppose so, but this “new issue” is really a reworked slice of a graphic novel, so it’s a part of a much larger story. I wanted a break from all the heaviness of RLP’s home/office stuff and show that sometimes Jude and Zoya’s field work (and getting away from Cecilia) can be a lot of fun.

ComicBook.com: You told me a while back that now that you're back on a regular publishing schedule you'd like to do a little more character work so that it doesn't have to be quite as focused on the "monster of the week," so to speak. Is that still a philosophy now that you're through with a new issue?

Goldman: I’ve never really done a “monster of the week” thing, RED LIGHT PROPERTIES has always worked off this larger novelistic structure, and we’ve only seen the tip of things yet. It’s actually hard to answer this question since I’ve been so immersed in thinking of this as a graphic novel-shaped story.

ComicBook.com: What's the deal with the collected edition you've got coming out? How do I get one? 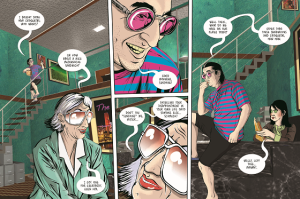 ComicBook.com: Is it tougher selling something like the collection to the comics direct market when the product started out as digital and you don't have "I did Daredevil once" or something to fall back on?

Goldman: I have no idea. I’ve never done Daredevil, and the only comic project I’ve done that didn’t start digitally was never sold in the direct market. This is actually my first work with a proper comics publisher.

ComicBook.com: Maybe it's just me, but it feels like your ratio of drawing to digital/photo images in this story is tipping more heavily toward hand-drawn than usual. Is that accurate or am I just seeing things?

Goldman: I’m not hung up on quantifying my pages that way. What I do care about is how well the finished page tells the story that was a script or an idea before that. However I get there is like, did I take a wrench or a hammer from the toolbox.

ComicBook.com: In terms of the collection--you're still tweaking. Most mainstream creators, they'll get grief if they change anything for the trade because they have people obsessing over weird little details in the monthlies. Is it kind of liberating to be able to re-color, re-letter...even add pages, as I know you've been doing? 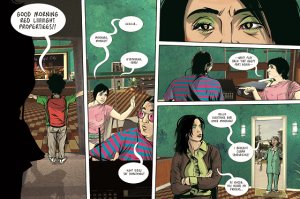 Goldman: Of course; I get a second chance to make things look like I did this book today instead of in 2010, make it ten times better/tighter than before. So yeah, I’m happy for all the extra time I took reworking the story and make it shine.

ComicBook.com: What's up with Red Light Comics #0? Right now, it looks like you've got a LOT planned to hit in the next few months, but certainly an issue out of sequence and called "The Freebie" just begs to be asked about.

Goldman: I’m going to release a free #0 digital single issue via Monkeybrain when the book comes out.

ComicBook.com: Are comics taking up more of your time, or less? I know the last time we talked you were doing a bunch of work for AMC, but at least one of those shows isn't around anymore and I wasn't sure whether that meant more time for comics or just a different set of gigs.

Goldman: Lately, yes; I’m delivering the book to IDW in a week’s time and jumping directly on drawing a Hindu God Epic comic for the Indian market for a few months. I’ve always loved Hindu mythos and this is a sexy sociopolitical transmedia dream gig.

Beyond that, yes I am still doing work for AMC but there’s nothing I can talk about right now. 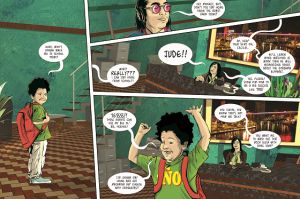 ComicBook.com: I feel like Jude here is...well, he seems more upbeat and likable than the last few stories. His less professional, less organized tendencies feel more like Fletch and less like a loser. Is that just a question of how I'm reading him, or how you're approaching the character, or is his apparent change in demeanor something that you'll be exploring a bit?

Goldman: Again, this issue is part of a larger story that was written/drawn several years ago and you’re experiencing it serialized now. In the larger context of the first OGN, The Three Towers will feel like a little case that’s a piece, a pause, a different day in the same guy’s crazy week.