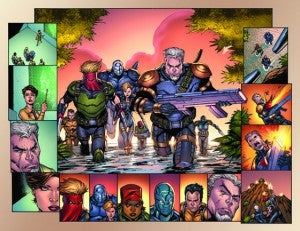 Comics firebrand Rob Liefeld has posted a "year in review" to his personal blog, which of course touches on a number of his personal projects, including both highlights and lowlights from his own work and what he perceives to be that of others, especially DC Comics.

On the New 52, Liefeld was even more blunt than most critics, including ComicBook.com, have been this year, saying simply that the bottom had fallen out of the publishing initiative in its second year and that the second and third waves of books haven't managed nearly the sales or critical success of 2011's opening salvo.

The DC 52 Initiative saw the bottom fall out from under it as sales on anything NOT relating to the Batman family of books fell off a cliff. Anything outside of two families of books, Batman and JLA, stood no chance. The mid-year launch of a [Teen] Titans spin-off, Ravagers, with half of the Titans numbers from nine months earlier was the first sign that no one was buying in blind any longer. The recent Titans/Ravagers related series Team 7 was loaded with incentives and variant covers in an effort to bolster its launch and it’s fallen further, faster than Ravagers did four months earlier. This has not boded well for the direction of anything outside the Batman and Justice League families. I had the honor of trying to “revive the patient” on a number of their “C” list titles. Good God, I had 4 of them throughout the year. My advice, don’t ask the physician to heal the patient and then take away the medicine and the equipment needed in order to do so. Several others have been tasked with the same challenge, also while having their hands tied behind their back. It was a fun experience, I was paid well, no harm no foul I suppose. I’ll be drawing on those experiences over the next few months, providing material  for keen insight into corporate comics circa 2013 and beyond.

He also noted that the Batman line itself is perhaps a bit strained as a result of recent projects like Death of the Family and Night of the Owls being expanded to accommodate every book with even a tangential connection to the Dark Knight. Say what you will about Liefeld--he's right on the money here; we've already discussed that a bit ourselves.

While the stand out talent of the year is Scott Snyder, you can’t burn the guy out asking him to forge a creative path for every book. As it is they should stop co-opting his every good idea and making it a multi-part cross-over epic. The Joker themed Death in the Family has lost some punch as a result of being pimped out to every possible Bat-related comic book. I’m enjoying the Snyder issues and the Batman and Robin chapters by Tomasi are great, but I have no interest in chasing every nook and cranny of this “event”.

He noted that part of the reason for Marvel NOW!'s success so far is depth--not just of Marvel's character libraries, but of their talent.

Marvel struck back at the initial DC 52 surge with the surefire mega-hit Avengers vs. X-Men which led directly into their Marvel NOW! re-launch. My only curiosity about their strategy was wether or not the public would backlash over yet another re-launch of new Marvel #1′s since the previous fall of 2011 was littered with new #1′s for Captain America, Hulk, X-Men and Thor. There has been no backlash whatsoever as the Marvel NOW! books have been embraced by retailers and the buying public alike. And they are being double shipped in order to cramp the charts and block out the Batman books. Case Closed.

On talent alone Marvel also goes much deeper....Geoff Johns carried the company for nearly a decade, he has a formidable presence on his books, but after Johns who is stepping up and expanding the playing field for DC ? My advice? Take some of those Dark Knight profits and invest them in the actual cloning of Jim Lee. I buy whatever Jim touches, so does everyone else, two of him gives you plenty of options, 3 Jims even more so. Get on that STAT. Or lean on someone else to  move the needle. Unless you can’t because there is no one else. Yet.

This is what separates Marvel from DC, the depth and scope of their bench. The X-Men family alone sports a slew of characters with plenty of commercial appeal in Gambit, Bishop, Storm and Fantomex. Where is DC’s counter? Martian Manhunter? Katana? Vibe? Seriously?

And looking forward to the next year, Liefeld suggests a handful of ideas--but one in particular that seems, in the context of his observations about the sales of Batman books versus virtually everything else at DC, pretty likely.

I honestly expect DC to rip a page out of their 1970′s playbook and put Joker in his own series because he is one of the few DC characters whose popularity warrants it. Robin, Harley Quinn, Red Robin….more Bat books will definitely punch the sales and market share ticket for DC, but how long until they truly are Detective Comics, all Batman, all the time?

He also noted that over at Marvel, in addition to the X-characters named above, some big-time characters like Spider-Man and Deadpool having only one book a month (even if Superior Spider-Man continues to ship twice monthly as Amazing did) seems like a missed opportunity and a big opening in the market for Marvel.

And, of course, if you're Rob Liefeld you don't just talk about the Big Two. He made sure to note that Image, following on a blockbuster 20th anniversary this year, is pretty well set for the near future.

Image comics promises greater depth in the new year as well. More Morrison, Kirkman, Hickman, Seeley, Vaughan, Brubaker, Keatinge, Graham and Stephenson. That’s a helluva line up that you won’t find at DC. Or Marvel. Image faced down its 20th year with its best and strongest year in ages and more big books are on the horizon. The success at Image is contagious, more creators I talk to are flocking to Image looking to get into the derby and compete at the highest level. Kirkman has easily outpaced the success the early Image creators achieved. We never had the kind of multi-media success that Walking Dead is enjoying and Kirkman himself is energized by the level of execution that Vaughan, Brubaker and Morrison are delivering. If  Iron truly does sharpen Iron, the swords at Image are the sharpest of all blades.