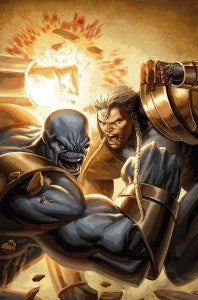 In the midst of his Twitter rant last night explaining some of his reasons for leaving DC Comics, Rob Liefeld touched on a piece of news that seems to be new--or at least it was to his Twitter followers, and it's nothing we can remember having seen before. It appears as though Brigade, the Youngblood spinoff last seen when Liefeld brought it back for a short life in 2010, may be joining the Extreme relaunch sooner than later.

"Bloodstrike, Brigade and a new title are in my future," tweeted Liefeld. "And there is another media component yet to be released...."

Bloodstrike (a film version of which was just optioned) is currently publishing as part of the relaunched Extreme Universe over at Image, and Liefeld's involvement is established. But Brigade is an unknown, and an interesting choice for Liefeld to come back to if he were to take on a new book to write and draw, as he's been doing with Deathstroke.

What the new title is, and what kind of new "media component" he could be teasing are intriguing; could there be a TV project in the offing for Liefeld? He's joked with followers on Twitter that he's interested in making the Youngblood and Bloodstrike movies into an interconnected universe--what if he wasn't joking, and wants to join Marvel in the TV-and-movie-universe party? Stranger things have happened...!

Since the relaunch was announced last year at the New York Comic Con, Liefeld's Extreme titles have been relaunched by a variety of creative teams and met with mostly glowing reviews. Brigade will join Glory, Prophet, Youngblood, Supreme and Bloodstike on the shelves at Image.