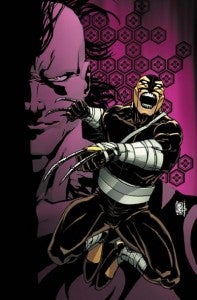 Marvel Comics has officially announced that Rob Williams will be taking over as the new writer on the Daken: Dark Wolverine series. Williams will take over the series with a special, all new Point One issue. The Point One issue is meant to be a great jumping on point for new readers.

Daken: Dark Wolverine follows the adventures of Marvel’s newest crime boss. Daken has already single-handedly executed a ruthless takeover of Madripoor’s criminal underworld and now he’s in pursuit of a new prize – the City of Angels. However, Wolverine and his fellow Avengers are ready to stand in Daken's way.

“I’m so excited to have Rob Williams coming on board Dark Wolverine. His sharp ear and sardonic wit, combined with his knack for twisty, noir-inspired plots are the perfect combo for Daken to take full advantage of,” said editor Jeanine Schafer. “We’re ramping up for a blow-out year – Daken has his sights set on a new status as a true kingpin, pulling all the strings, and stopping at nothing to get what he wants. Lots of gorgeous men and women, double-crosses and the constant threat of going over the edge. What more could you ask for in a great noir?”

Daken: Dark Wolverine issue #9.1 is scheduled to arrive in comic book stores on April 27, 2011. The cover to the issue is by artist Giuseppe Camuncoli.