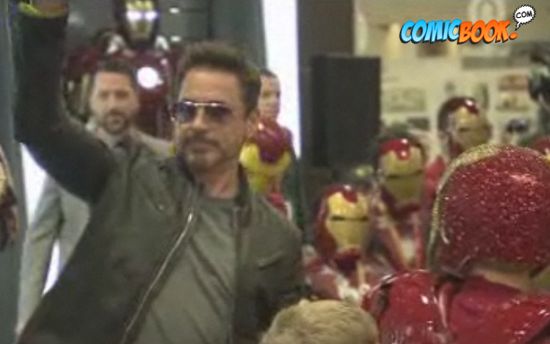 The Iron Man 3 Kids’ Costume Event was a Marvel sponsored event at Comic-Con for children ages 2-14 to dress up like Iron Man. Participating kids were promised a poster autographed by Robert Downey, Jr.

What they wound up getting was also a chance to meet Robert Downey Jr. himself. The kids were all lined up on stage and asked to yell out “Iron Man,” when suddenly a familiar voice said, “Did I hear my name?” The kids and crowd then went wild as Robert Downey Jr. strolled out. And nice guy that he is, Robert Downey Jr. stuck around for awhile, leading the kids in an Iron Man cheer and talking personally with many of them. Marvel’s “Iron Man 3” is slated for release in the U.S. on May 3, 2013.