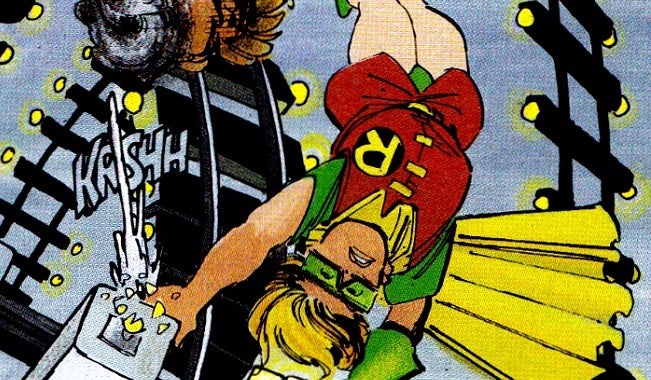 A local news show in Michigan has persuaded an extra to break his contractually-mandated vow of silence and share some significant details about Batman V Superman: Dawn of Justice.

An anonymous extra joined WILX News 10, claiming that the scene being shot at an Art Museum on Michigan State University campus will feature a physical altercation between Bruce Wayne and Lex Luthor. They also say there will be fireworks, paparazzi and "heavy special effects." A military presence will be expected, according to the reporter because of the altercation between Waye and Luthor (so...probably more than just some pushing and shoving on the red carpet).

Most interestingly, though, Robin reportedly appears in the script...and is a female. This led the reporter to reiterate persistent rumors that The Hunger Games's Jena Malone could be playing Carrie Kelley in the film, the female Robin from Frank Miller's The Dark Knight Returns.

While that's pretty clearly speculation, the fact that they've been told there's a female Robin in the script is telling -- and if it came from this same extra, it could imply a showdown between Batman, Robin, Lex Luthor and the military.

You can check out the report below.

Batman V Superman: Dawn of Justice will be in theaters March 25, 2016.