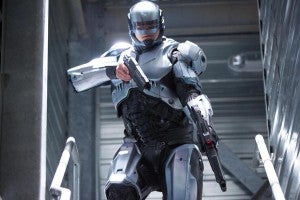 The first full-length trailer for Jose Padilha's RoboCop reboot hit the Web today, bringing anybody who didn't make it to Comic-Con their first looks at RoboCop, ED-209 and other aspects of the film's world in action.

You can check out the trailer embedded below.

The film stars Batman's Michael Keaton, The Dark Knight's Gary Oldman and The Avengers's Samuel L. Jackson alongside Joel Kinnaman, the star of AMC's The Killing who plays Alex Murphy, the police officer who is almost killed by a car bomb and ends up as a test subject for "the future of law enforcement."