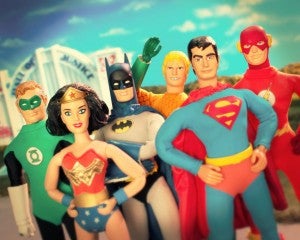 Tonight, Robot Chicken will air their DC Comics Special on Adult Swim. It's the first new episode of the season for the long-running stop-motion animated comedy show, and many fans can't wait to see what Buffy the Vampire Slayer star Seth Green and longtime ToyFare Magazine writer and editor Matthew Senreich have to say on the matter of the DC Universe. "They're iconic since before I was born. These are the heroes that represented the great ideals of human potential," Green told USA Today of the DC heroes. "These images were held up to me in an educating kind of way, so it's just embedded really deeply." The pair, along with DC Entertainment Chief Creative Officer Geoff Johns (who co-wrote the episode), have been doing a pretty aggressive media blitz in promotion of the episode, talking to the mainstream media, making entries on DC's blog and leaking a couple of scenes to whet fans' appetites for what's coming tonight. Before we get into the actual show clips, though, there's one of DC's "5.2 questions" that's based on the episode, and it's definitely worth checking out. Johns, Green and Senreich talk their favorite DC heroes, what graphic novel they would recommend to new readers and more for just about two minutes. First up, there's this clip, that essentially sets the stage for the whole story. Aquaman, tired of being the butt of too many jokes, will turn to the dark side tonight and help the Legion of Doom take down the Justice League once and for all! (Dun-dun-duuuuuun!) What could drive him to such desperation? Well, check out one of those jokes below. Then we've got this not-so-subtle nod to both DC continuity and The Dark Knight Rises, as Bane breaks Batman's bake "like a bag of uncooked spaghetti." Speaking to concerns about the treatment of the material (and, presumably, of Aquaman, a character Johns writes in two books monthly, Johns told USA Today he wasn't particularly concerned. "There were a lot of questions: Do you really want Robot Chicken to dive into DC Comics? Hell yes we do," said the writer. "They didn't do the Star Wars specials because they hated Star Wars. They had a lot of fun with it, and it celebrates the love and the laughter we have. We laugh at this stuff but we still love the characters."

Made in Abyss Season 2 Reportedly Eyeing an Announcement