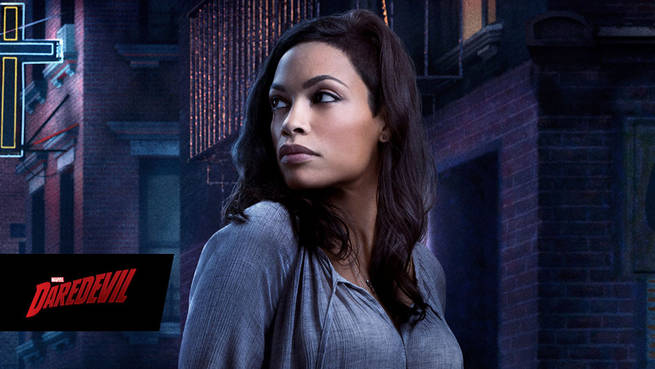 Marvel has just announced that Rosario Dawson will return to Daredevil Season 2, reprising her role as Claire Temple aka - the Night Nurse.

However, that's only a small piece of the deal Dawson signed. The release also states that her signing is part of a larger exclusive TV deal that will also allow her to appear in any of Marvel's other Netflix original series. Yup, that means her character may also be patching up Jessica Jones, Luke Cage and Iron Fist.

?After working with Rosario in the first season, we knew instantly that we had to have her back for our second,? Executive Producer/Head of Marvel TV Jeph Loeb told Marvel.com. ?Claire Temple proved a fan favorite in Season 1, and we can?t wait for fans to see all the plans we have for her next.?

This looks like the first step at tying this "Netflix-verse" together before Marvel's A.K.A. Jessica Jones, Marvel's Luke Cage & Marvel's Iron Fist come together for Marvel's Defenders.

There is no current release date for Marvel's Daredevil season 2.

What do you think ComicBook.com readers? Are you excited to see more pieces coming together for Marvel TV? let us know below.