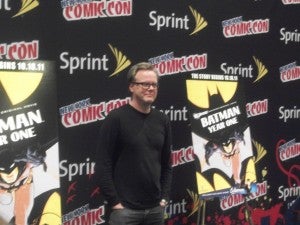 Legendary animator Bruce Timm has stepped away from overseeing DC Universe animated feature films in order to oversee a new Justice League animated series set in the world of his fan-favorite "Timmverse," where Batman: The Animated Series and Justice League Unlimited (among others) were set, reports CBM. The report comes on the heels of yesterday's news that Timm had left the DC Universe features in the hands of his longtime associate Jim Tucker. While it's safe to classify it as rumor for the time being, there seems to be some credence to it, as Warner's DC Animation publicist downplayed news of Timm's leaving on social media. Stricken by the news, fans reacted generally negatively to Timm's departure even while they had generally good things to say about Tucker as his heir apparent. On Twitter, when fans asked Warner publicist Gary Miereanu about the Timm situation, he responded in a series of tweets, saying:

"Bruce Timm is stepping away from the DCU Animated Original Movies for a bit ... but he'll be back - in a very big way. "He's not going far, and he'll be back. "Bruce Timm continues his amazing work at Warner Bros. He's only taking a break from DCU films to develop more of the stuff you love.  Honestly, he never left. Green Lantern: The Animated Series ... The Flaming C ... Dark Knight Returns. And something new and cool."

Could that "something cool" be a new Justice League series? Well, that's the rumor, and it's one that makes sense. CBM claims that the sticking point at present is the Justice League movie, suggesting that by Comic-Con, we could have an announcement not only about the status of potential Man of Steel sequels and the live-action Justice League film, but a Timm-led animated iteration as well.