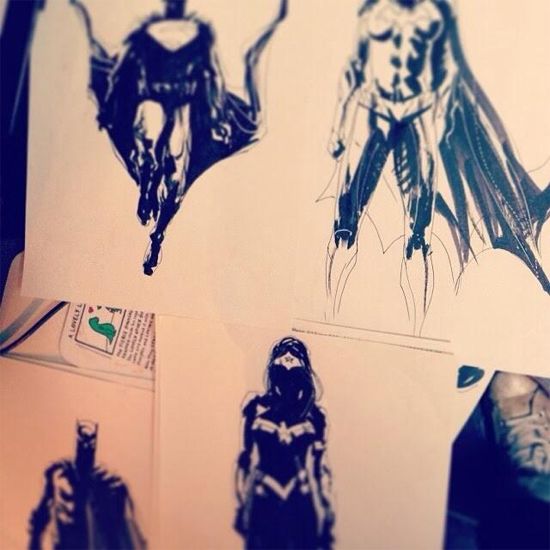 Earlier this week, director Kevin Smith, who is hosting the upcoming Man Of Steel fan chat on Saturday, let the cat out of the bag that there might possibly be some concept art for Batman Vs. Superman released during the chat. Of course, Smith's reveal means that if any artist posts any type of mysterious Batman and Superman drawing on the Internet, then the Internet is going to label it as Batman Vs. Superman concept art, and that is exactly what has happened.

Artist Jock posted some art work of Batman, Superman, Wonder Woman, and Batgirl to Instagram. When a fan asked Jock what the artwork was for, he gave the vague reply, "Ah, a WB thing." WB is short for Warner Bros., which is the studio behind Batman Vs. Superman. However, Warner Bros. does a lot of things from live action to animated to video games, so there's really no telling what Jock's artwork is for. The fact that he choose to post it right before the big Man Of  Steel fan chat though has many speculating that it is for Batman Vs. Superman.

Wonder Woman has been rumored for the Batman Vs. Superman movie, but there's been no indication so far that Batgirl is part of the movie. However, since Warner Bros. is introducing an older version of Batman, it would make sense that his supporting characters like Nightwing, Batgirl, etc. would already exist in the DC Cinematic Universe. The first Man Of Steel movie also hinted at the possible future introduction of Supergirl, so why not Batgirl?