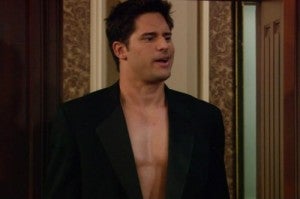 Joe Manganiello, who was once rumored to be a top pick to play Superman in Man of Steel, didn't make it into the movie--but his look did.

"He stole my beard, man!" Manganiello joked with MTV News about Henry Cavill's look during the first act of the film, joking "Let's go find him!"

Well, word is he's being considered for the role of Batman in the forthcoming Batman vs. Superman film, a sequel to Man of Steel in which he would appear onscreen with--and square off against--Cavill's Superman. So he might have the chance.

But would he still be interested in doing a superhero film after the hosts bringing up his failure to land Man of Steel prompted him to joke "Just rip off the scab?"

Well, he's game--but only if the movie is something special.

"I want to do something that's a real deconstruction of the genre," Manganiello told MTV News in the video interview embedded below. "There's so many superhero projects out there that it's almost like they're becoming normal, so I want to do one that just flips it on its head and makes it crazy. I want to make the Fight Club of superhero movies."

Deconstructing superheroes? If only there were somebody out there willing to make a film version of Watchmen--oh, wait, that's Man of Steel director Zack Snyder, too, isn't it?

Of course, if Manganiello were going to appear as Batman, he would have to overcome one of the same obstacles that reportedly stopped him from being seriously considered for Man of Steel: He's got a regular gig on True Blood, and it would be difficult to shoot around that for a film on the scale of Batman vs. Superman.