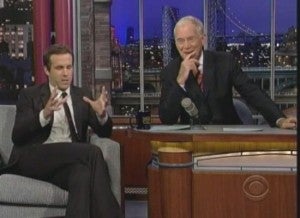 On tonight’s Late Show with David Letterman, Ryan Reynolds appeared to promote the upcoming Green Lantern movie, which arrives in theaters everywhere on Friday, June 17, 2011. Ryan Reynolds kicked things off by talking about parachuting out of airplanes, skyping with his doctor while filming in Africa, and being bitten by a spider. After sharing some laughs with Dave, Reynolds got down to business of talking about Green Lantern.

Letterman asked, “Did you know anything about the Green Lantern before you did the film?” Reynolds replied, “I knew a little bit. I knew the logline. It was a guy who was bestowed a powerful ring by a dying alien on earth, and he joins this intergalactic police force.”

Letterman said, “It’s a lot of computer generated effects. It’s CGI is what…” Reynold said, “There’s definitely a lot of CGI.” Letterman asked, “Does that affect how you act in the film?” Reynolds replied, “No, it doesn’t affect that too much. It does affect the suit. The suit I wear in the mythology of the movie is made of energy, so it’s not something that I can actually physically wear, so what we’re wearing is these motion capture suits. We’re all wearing these gray suits with these tracking dots, and we look sort of like these crash test dummies, who lost their Volvo.”

Reynolds continued, “But these suits are really, really unforgiving. I mean these things are as tight as you can imagine, and we had to shoot these huge fight sequences in these things. And one of these aliens that I fight in the film, he’s supposed to be about nine feet tall, and he was played by a stunt guy. And the stunt guy was already six foot ten, just a massive, massive guy. So they put him on these stilts, which made him about nine feet tall. For some reason, early on, he made the decision that he was going to go commando for the whole time.”

Letterman asked, “Was this covered at a meeting, where it was…” Reynold said, “You would think it would have been somewhere. I mean it’s a fight sequence, border line sexual harassment. So you know, I’m crotch level with this guy, because he’s like nine or ten feet tall, and I’m staring at this guy. And, it’s like, you know, it looks like he strapped a baby’s leg to his waist.”

Reynolds continued, “ I’m sorry. I’m sorry. I know.” Letterman quipped, “And you’re thinking ‘Who needs skype now?’” Reynolds responded, “Yeah, exactly. So we had to do this fight sequence, and I actually had to go out and talk to the stunt coordinator and tell him, ‘Can you get this guy to strap that thing down?’ This is freaking me out. I mean he’s jumping on top of me. He’s smashing me to the ground.” Letterman quipped, “Get that guy to strap that thing down.” Reynolds continued, “I didn’t sign up for this.” And Letterman added, “No, I don’t blame you. No, you need a break.” 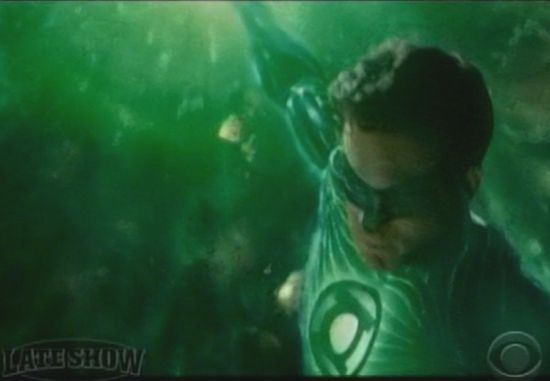 In addition to the interview with Ryan Reynolds, the Late Show also played a clip where Green Lantern is fighting Parallax, a creature made of fear.