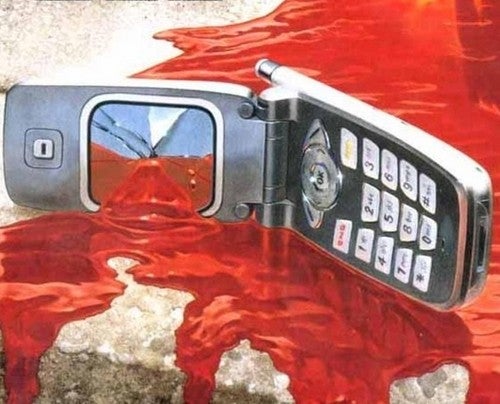 Benaroya Pictures and The Genre Company announced today that Samuel L. Jackson has joined their adaptation of Stephen King’s novel Cell--that's not all, though, and the press release, as it turns out, wasn't entirely accurate, according to the film's lead (and producer), John Cusack.

Jackson plays Tom McCourt, an engineer and former soldier who with Cusack’s Clay Riddell character flees from Boston as the world turns mad thanks to the phones. The pic focuses on the fallout when a powerful signal is broadcast across cell phone networks worldwide. The signal re-programs the users’ minds and makes them murderous beasts.

Tod “Kip” Williams is directing the thriller based on King’s 2006 apocalyptic horror bestseller with financing from Benaroya. Production is set to start early next year.

And here's where it gets hinky: according to the American Film Market's press release, "King co-wrote the screenplay with Last House On The Left’s Adam Alleca." Not so, says Cusack, who reiterated the announcement that his War, Inc. and 1408 collaborator Mark Leyner has the job, as he has since February.

You can check out Cusack's tweets on the subject below:

I will help produce with Richard Sapperstien - we have been developing with mark and kip for months - we are very excited - and have adapted — John Cusack (@johncusack) November 4, 2013

King in the same way we we all did 1408 -very true to source - and leaping into doors the great king leaves open — John Cusack (@johncusack) November 4, 2013

I love working with kings writing - and mark leyners - the combo mixed with kip and I and Richard will be synapse rattling at it finest !