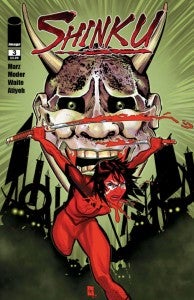 This is interesting! After a delay on getting the issue to stores, it took me a while to get Q&A questions out to Ron Marz on Shinku #3, and as a result we've now got a situation where he's writing about me the same day I'm writing about him. Surf on over to Comic Book Resources to check out his column, but not until after you've seen this!

Remember, these commentaries are spoiler-intensive. Don't read it if you haven't read the comic!

ComicBook.com: Think that cover might be too subtle? I don't know if there's enough blood on her.

Ron Marz: Hey, it's a vampire story. Vampire stories have blood in them. Blood, not sparkling.

ComicBook.com: So, this may be outside of your wheelhouse a bit but I'm going to ask it the right way - Did you script the book in such a way that the color palette is different when we're dealing with the vampires as opposed to the rest of the world?

RM: No, the color is all Mike Atiyeh, who is doing amazing work. Early on, we talked about the use of red on the pages, using it sparingly and giving the blood more of a flat look to contrast it to the rest of the palette. Mike's the one who came up with the "marker comp" look to the color, which is actually more time-consuming for him to produce.

ComicBook.com: And/or that Shinku is closer in her look to the former than the latter? Is that significant?

RM: We wanted Shinku to stand out on the page. That's part of why she's dressed in red motorcycle leathers.

ComicBook.com: The first sequence in this issue feels very Godfather-esque. Asano almost seems to avoid saying what he's saying in direct terms. Am I reading too much into that or is it a quirk of his character?

ComicBook.com: I can't help but feel like if Davis is in danger (but he's being looked out for), the best way to get at him might be Reizo. Is he in danger simply by virtue of being the Next Best Thing?

RM: Davis is definitely in danger as the next few issues show. Reizo is more of an incidental character, at least for now.

ComicBook.com: It's interesting, too, that Reizo references the skeleton behind the club. Obviously the readers know what the story there is, but if these vampires leave bones behind (as opposed to just burning off into dust) does that potentially raise the specter of law enforcement involvement with Shinku's crusade?

RM: Probably not, because we know the vampire clan is a powerful shadow presence throughout Japanese society. One of the reasons they're able to operate with impunity is because they're the ones pulling the strings behind the scenes. Shinku's crusade is very much a solo mission because of that. She's not going to get help from traditional places like law enforcement or the military.

ComicBook.com: Does that price gun-looking tool that Reizo and Shinku handle have a specific role to the story, or is it just "expensive toy" in the script?

RM: No specific purpose beyond showing that Reizo and Shinku both have something of a child-like quality to their characters. For Reizo, it's because he's fairly immature. For Shinku, it's because so much of her life has been sheltered, or given over to this obsessive crusade, that she doesn't have some of the social skills you would expect her to have.

ComicBook.com: We get a little more insight into Oshima here, and it seems as though he's pretty steadfastly dedicated to Shinku's service. Chastising Davis for having jitters doesn't seem like the behavior of a guy who's likely to be tortured into spilling any beans. Am I reading that right?

RM: Oshima is very much the loyal sidekick. That sense of duty is obviously a facet of samurai culture. So even though Oshima is not from samurai ancestry himself, his relationship to Shinku reflects that hierarchy.

ComicBook.com: DC's rebooted I, Vampire has been exploring whether or not there's free will for vampires--if they can determine their own destinies or if they're set by their creators or their nature. Meanwhile, on The Walking Dead (TV show), there's been some discussion of whether or not putting the zombies out of their misery is actually humane. Put these together, and it certainly asks some unfortunate questions about Shinku's killing sprees. Are these issues you'll feel pressed to eventually talk about or is the world of Shinku a little more black-and-white than that?

RM: Shinku certainly looks at it in black-and-white terms. But I don't want to simply paint the vampires in only black-and-white terms. As we go forward, there will be more nuance in the depiction of various vampires. They'll still be the bad guys, but I think any story is stronger when the audience at least understands why the bad guys act the way they do. Hopefully, readers are starting to have a better understanding of Asano's character.

ComicBook.com: Was the site of Shinku's battle with the small group of vampires at the end a destination for her? I mean, it seems like if she were just focused on following the drunk girl she may have been watching closely enough to figure something was up!

RM: It was a case of Shinku staking out the park as part of her usual "hunting ground," rather than following the drunk girl. And that's an actual park in Tokyo, by the way. My chief concern was picking a location that would have some traditional visuals, something that harkens back to the feudal era. We wanted that as a backdrop to the action sequence.

ComicBook.com: Obviously there were reasons for the issue shipping late, including the both of you taking on some extra freelance work--but #4 is teased in the back as hitting in December. Are we back on schedule for the foreseeable future?

RM: Yes, #4 will be in stores the first week in January, and #5 will follow in February. Certainly the delay was nothing anybody was happy with. Yes, part of it was Lee taking some time away to complete a few issues of paying work. Obviously a guy's gotta eat. But the situation was mostly due to health situations in Mike Atiyeh's entire family. Every time one situation resolved itself, something else immediately reared its head. Sometimes the real world inserts itself into these fantasy worlds we make up, and it has to take precedence.

ComicBook.com: We gave Mike the option of giving up an issue or two until things were back to normal for him, but he really wanted to stick it out and keep the issues consistent. And everybody on the team supported that fully. When a creative team clicks, it's like a family, and that's definitely the case with the Shinku team. I've known all these guys for years. We appreciate the audience being as understanding as it's been.