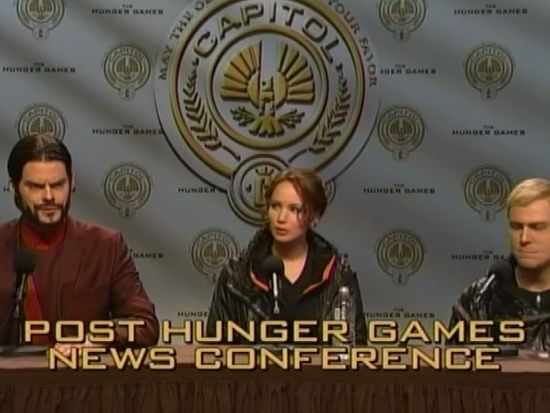 With Jennifer Lawrence hosting Saturday Night Live, it's no surprise that there was a Hunger Games skit. The Hunger Games skit was set up like a typical post-game press conference. Several reporters asked Katniss and Peeta questions. One reporter asked Katniss if she had a chance to speak to any of the other competitors after the games, and Katniss replied, "They're all dead." The reporter explained that he usually covered the golf beat. Another reporter asked Katniss to take them through killing a girl with genetically engineered wasp, Katniss replied, "Well, it was pretty basic, I was high up in a tree directly above her, the wasp's nest was on a branch, I sawed it off, and the nest landed right on her. It was just like we drew it up in practice." Another reporter made fun of Peeta for disguising himself as a rock Peeta explained, "There's more to the games than manly aggression and testosterone. Sometimes you have to use your guile and cunning."

Naruto or Naruto Shippuden? Fans Debate Which Anime Did It the Best