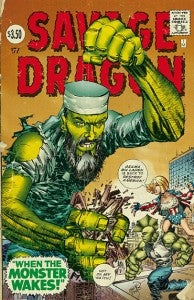 This month: Malcolm and Angel Dragon versus Osama bin Laden. Need we say more? Well, a little more... Gavin Higginbotham: So here we go! This issue gained more attention than normal when it was first announced. Did this cause you to feel any extra pressure to get things just right? Erik Larsen: It was a weird issue to work on for a number of reasons. But there's always pressure. Every time I do an issue I try to do my best. GH: Are you concerned with what kind of reaction the issue may receive? It was largely done with respect. Well, as much respect as you can give when writing about a giant, green mutated monster. EL: Sure, and I tried to dodge some of that by not putting actual words in Osama bin Laden's mouth. But sure--it is a concern. As fun as it is to offend--it can be a very sensitive topic. Wounds are quite fresh, even ten years later. I'm trying not to be a heartless cad. It's not a role I play well. GH: We get a mixture of real world events explaining the resurrection of Osama bin Laden, married with your own continuity involving the Lava Lords. Was this meshing of fiction and non-fiction done to create a "plausible" means for bringing bin Laden back to life? EL: As plausible as things get around here. Real events had to be my jumping off point but beyond that--I felt I could run with it and mixing in my characters early on made it clear this wasn't going to be a biographical comic book. In some places I really felt compelled to back off. The more I said as an explanation the more ridiculous it sounded. It's like the origin of the Fantastic Four, in a way, the more detail you give the more ridiculous it sounds. Russ Burlingame: Is Dragon in it for the long haul with the Flash Gordon suit? I love it. EL: Nothing lasts forever around these parts. You know that. But for the time being--that's his new costume. GH: Dragon hasn't seen his kids now for nearly three years now. It's easy to forget that fact as an incarnation of Dragon has been seen up until fairly recently. Those kids really have been through the wringer in that period! EL: They've been keeping active. A lot of comics do these sprawling story lines where little actually happens whereas I tend to pack a lot in. Over a three year period there ends up being a lot of events. I really couldn't cover much of it but I wanted to give folks the idea that these guys were getting each other caught up on current events. I had to do some redrawing on those pages with Dragon on them, by the way, because I talked too damned much. When I got the pages back from Tom Dragon was all but obliterated. RB: When Angel said how confusing their situation was, I grinned and nodded, but when the Editor's Note said that, too, I chuckled quite a bit. This book is easy to pick up and understand most months, but when you really delve into the history it gets harder to explain. EL: Which is a good reason to avoid all that. The important thing is to try and focus on the key events and let the rest be there if you want to look into it. Really, it's like anybody's life. You get the key events and that's it. You can know a person for 20 years and still not know everything--I' try to remind people about the important stuff. Summing up the whole series is no easy task especially given that 20 years have passed here and they have been quite eventful. What's key is who these guys are and what they're trying to do. Malcolm is his father's son and he's taking up where his dad left off. I'd hate for readers to think the book is so dense that you couldn't drop in at any point really. RB: Between that, and all the time he spent as other people, are you having to dive back into reference material to remember exactly what Dragon might or might not remember in any given scene? EL: I really should. GH: Peewee (plus Daredevil and the rest of the Little Wise Guys) are revealed to be ageless while at the same we see Larry Bradford has aged since we last saw him. Nice subtle contrast there. EL: Larry looked a bit more like Reed Richards than I had intended. And of course this is all going somewhere, as you might guess. If the ability is passed on to PJ you can just imagine how many people will be out for their blood--literally. GH: The events of last issue concerning Angel and Frank causes a fascinating conversation between Angel and Malcolm. It really explored the unique relationship setup between the Dragon "siblings" and Frankie Darling. EL: The whole arrangement is somewhat strange. Mostly--I'm thinking Malcolm is trying to reassure himself that some of the things he's feeling are okay. That it's not incest or something. RB: Was it ever tempting to draw bin Laden with the ruined eye or something from the original gunshots, or was it more important to have him recognizable than grotesque? EL: I thought it was more important to have him be recognizable. Plus--we never really saw the extent of his injuries. All we saw was that one photoshopped picture.

GH: A Whitney Houston obsession leading to bin Laden's death? Really? Ha! EL: Straight from the tabloids, that one. RB: Should we read anything into the fact that you refer to the whitney Houston song as "noise" during the chase scene? EL: Anything making a sound is technically noise. Angel wasn't editorializing. GH: Was killing bin Laden in fairly graphic fashion somewhat therapeutic? It gave people a chance to see one of the world's most hated figures get killed, something that some folks seemed to get upset about. EL: I wanted to try and give it closure. The real death just seemed so unreal in a way. There were no pictures or anything and I think a lot of folks just felt kind of hanging. It wasn't therapeutic to me particularly but I was definitely going for a shot that made it clear that this time we know it's over. GH: Angel's line about feeling guilty about cheering a man's death seemed to be echoed by some folks when bin Laden was killed the first time round. EL: There is that. I do think that needed to be said. RB: Is it easier with bin Laden to have Malcolm just say, "Meh. He was a dick" than it would be with most other characters we just saw get blown apart? EL: Well, he was. Not that bin Laden didn't have a point--but his methods were absolutely inexcusable. I don't think there are a lot of folks thinking he was an okay guy. What he did was horrific. RB: There are elements of this issue that are very evocative of 2001 or 2002. Not really in a bad way, but were you trying consciously to recapture some of the feelings of an immediately post-9/11world? Between the "I Love NY" shirt and the "soldiers are the real heroes" line and all Angel's very dramatic lines about DESTROYING AMERICA, it feels like some of the comics (and entertainment in general) we got around that time. EL: It was not an easy issue to write. I didn't want to trivialize what happened on 9/11 yet at the same time--ten years have passed and that distance has made it somewhat less touchy as far as subjects go. My attempt was to try and give the whole thing some sense of closure. With bin Laden getting shot and buried at sea and no official photos there's this linger doubt that what we were told may not be what actually happened. People send me all kinds of stuff--I heard from one guy who was convinced bin Laden died back when Bush was in office but that he was kept on ice so he could be brought out at an opportune time (why Bush would let Obama take all the credit and not drag Osama out during the election to give the Republicans some momentum was never explained). The point being--I think a lot of folks simply don't feel as though it all came to a satisfying conclusion. My attempt was to try and create something akin to that--a bombastic, satisfying end to the Osama bin Laden story. GH: Savage Dragon has consisted of self-contained stories ever since the Emperor Dragon arc concluded. There's been a regular trade program. The entire series is now available digitally. It really has been the most accessible period in the book's history for new readers to jump onboard. Are you pleased with how everything's going in that regard? EL: To some extent, yeah, and we're finally doing those oversized collections people have demanded. Hopefully that will go over well. I'm looking forward to them. GH: And now we've got the first multi-issue arc coming up next. What can you say about this upcoming alien invasion? It's been brewing for a LONG time now. EL: Yeah--30 years. It was honestly something that we were never going to get to. The whole notion of Vanguard was that he was so far from the action that he would never see any action. But it's eded up being this huge dangling plot thread. Readers have been asking about it for three decades now and with this latest Vanguard serial I wanted Vanguard's life to finally progress a bit and tie in with the lead story so that's how that happened. It helps that Gary Carlson is brilliant and Frank Fosco is terrific on the Vanguard story. They fit more cool stuff into six pages than most writers fit into six issues.